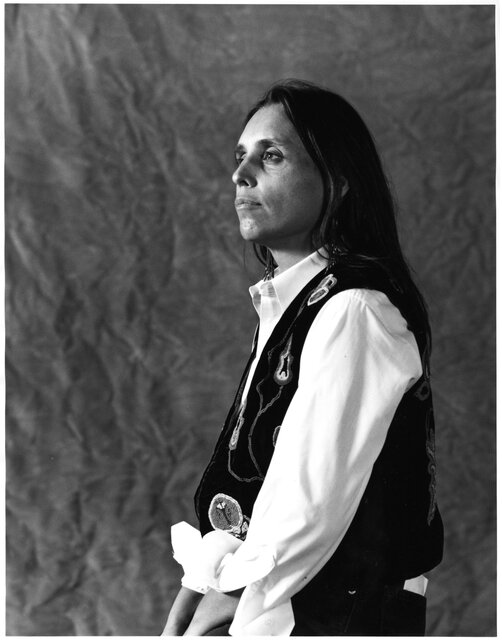 For Winona LaDuke the best part of running for Vice President in 1996 and 2000 on the Green Party ticket with Ralph Nadar was meeting so many people who really want to see a democracy that works—who really want to vote for someone they believe in. At rallies women would bring their daughters up to Winona saying, ‘We want them to grow up and be like you.’

Ojibwe leader, writer, food activist, rural development economist, environmentalist, Harvard graduate—Winona, which means first born daughter, is a force to be reckoned with. She’s the founder of the White Earth Land Recovery Project and the executive director of Honor the Earth. Most recently she was a leader at Standing Rock fighting the Dakota Access pipeline. She’s a visionary and a fighter and she’s in it for the long haul.

When we visited Winona on the White Earth Reservation in 2004 for our Hidden Kitchens story Harvest on Big Rice Lake she spoke to us about her family, her life and work—about running for Vice President, about harvesting wild rice on the lakes of Minnesota and creating jobs on the reservation, about how her Ojibwe father met her bohemian/artist/Jewish mother in New York City, how her dad went on to Hollywood to star in the Westerns and how he later became the New Age spiritual leader called Sun Bear.

Born in Los Angeles and raised in Oregon, Winona moved to White Earth, her father’s reservation, after she graduated from Harvard in 1982. When she first arrived, she worked as the principal of the Reservation’s high school and became active in local issues. Seven years later, she started the non profit White Earth Land Recovery Project, dedicated to restoring the local economy and food systems and preserving wild rice.

Today Winona LaDuke operates a 40-acre industrial hemp farm on the White Earth Indian Reservation with the idea of creating textiles for the people and the planet — of working towards a non petroleum based future. And she’s started 8th Fire Solar, operated by Anishinaabe, manufacturing solar thermal panels.

“According to Anishinaabe prophecies, we are in the time of the Seventh Fire. At this time, it is said we have a choice between a path that is well-worn and scorched, and a path that is green and unworn. If we move toward the green path, the Eighth Fire will be lit and people will come together to make a better future.”