War and Food and Manga 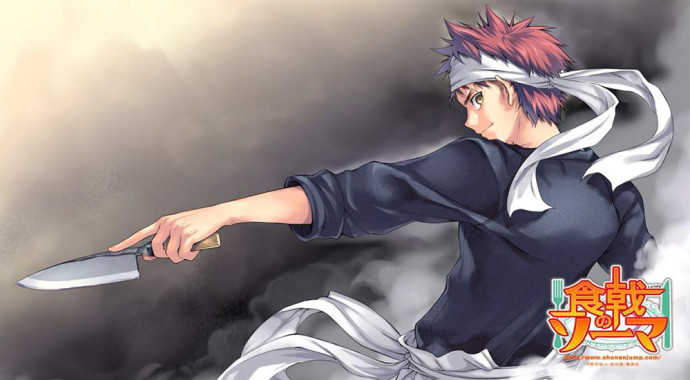 Manga, the ubiquitous Japanese comic books written on just about every subject—sports, music, sex, shooting pool—represent about 40% of all books published in Japan. In recent decades ‘food manga’ has exploded. Stories of food and conflict and competition abound in mangas like Soldier of Food, Food Wars, Cooking Papa…The Kitchen Sisters Present—Hidden Kitchens: War and Food and Manga.

“Manga is a cradle to grave phenomenon,” says Deb Aoki, writer for Anime network and Publisher’s Weekly. It’s a visual storytelling medium that people enjoy from the day they first start reading or enjoying pictures to the day they die.

“There’s this Japanese concept, Otaku,” says Sylvan Mishima Brackett, chef and owner of Rintaro Restaurant in San Francisco. “Otaku is a deep, passionate enthusiasm about some obscure part of the universe. Manga tend to cluster around very specific Otaku. It’s a place where people can brush up on the hyper-specifics of their enthusiasms.”

“Food manga, gurume manga, gourmet manga, is one of the major genres within manga that’s just been growing exponentially,” says Nancy Stalker, Professor of Japanese History and Culture at the University of Texas at Austin. She wrote a paper called Gourmet Samurai: Changing Gender Norms in Japanese Food TV.

Food manga first appeared in the 1980’s when the Japanese economy was very strong. One of the first, Oishinbo, ran for over 20 years and became the basis for an animated series, as have many manga since.

“There always has to be conflict in manga, especially in food manga,” says Zhong. “There is not any real peace in manga. If there is peace it’s really short, maybe one or two chapters, then back to war right afterwards. War produces content.”

Since Japan opened to the West in the nineteenth century, food has been an element of its international identity. “Traditionally the eating of four-legged creatures was proscribed by Buddhist belief,” says Stalker. “The Emperor first publicly ate meat in 1873. Eating beef was seen as something that would help build the national physique and make the Japanese more like westerners.” In order to compete with western soldiers, the Japanese military began to introduce more beef, more meat and fat, into the diet of the soldier to help build a strong army.

The modern manga industry came into being after World War II. It started with Osamu Tezuka, creator of Astro Boy, who was influenced by Walt Disney. “That American content was brought over by the American Occupation,” says Leyla Aker, Senior Vice President of Publishing at Viz Media, a company that specializes in Japanese graphic novels and anime. “During the American occupation of Japan a large portion of the Japanese population was subsisting on hand-outs given by the American forces.”

There were severe shortages of food during the Occupation and all foods were strictly rationed. When the circumstances of the war became dire many people resorted to eating bark from trees and replacing sawdust and wood dust in recipes for flour. Many Japanese died of starvation.

Miles Thomas, Brand Manager at CrunchyRoll, remembers an anime called Grave of the Fireflies. “One of the most evocative films I’ve seen, about two orphans during World War II who are starving, hungry. They steal food, trying their hardest to survive.

“It really makes you think about the darker side of food when people don’t have enough of it to survive,” adds Tiffany Chen who is also a Brand Manager with Crunchy Roll. “For a long time, World War II was just a history you studied in class. I never really felt connected to it personally. A lot of young people actually don’t even know about the atomic bomb. After watching this film, it was a pretty sobering moment.”

Oishinbo, one of the oldest of the food manga is very popular with adult men, Aoki tells us. “The main character is this scrappy reporter. His father is this snooty gourmet who sets up this ritzy gourmet club for only rich people. They have dueling palette battles.” Oishinbo is written by Tetsu Kariya who is very opinionated about food. The manga creates drama about different food issues – about growing it and cooking it. “It’s kind of controversial,” says Aoki. “He defends eating whale meat, the history of it, how delicious, how dare anyone tell us not to.”

“Tetsu Kariya has a very progressive, political stance,” adds Lorie Brau, Associate Professor of Japanese Foreign Languages and Literature at the University of New Mexico, “He embeds these social messages inside his manga.” One of Oishinbo’s chief concerns is foreign influences. How do you maintain the important aspects of your culture while still engaging with the world at large? The manga uses food as a lens to address Japan’s place in the world.

There is a different subset of manga targeted at young Japanese women called Yaweh about homosexual love affairs. “Boys love” is one of the most popular sub-genres of manga. “Antique Bakery features a cast of tall, thin elegant beautiful young men. They all work in a western style bakery,” Aoki tells us. “Women fall in love with them because they are so handsome. But they’re not available,” says Brau. “But the cakes are available so they make many young women happy.”

What Did You Eat Yesterday? has become a very popular manga for recipes. The manga tells the story of a gay couple, one of whom is a lawyer, the other a hairdresser and the lawyer is very intent on creating economical, delicious meals for the two of them.

“In the last 10 years Japanese demographics have been shifting,” says Nancy. “Fewer and fewer people are getting married. The rate of unmarried men ages 30 to 34 climbed from 21% to 47%. For women it jumped from 9% to 34% in a decade. The media has come up with this term “herbivore men” Urban men in their 20 and 30’s who are more into fashion and culture than women. Rejecting flesh, therefore they are herbivores. Other conservative pundits say “well, it’s the increase of carnivorous women, women who are too aggressive and focused on their career and refuse to become a full time housewife they create the herbivore man. This is changing men’s relationship with food. They have to increasingly be responsible for their own meals. That is being reflected in these dramas that show a kind of everyman develop a sense of culinary confidence.”