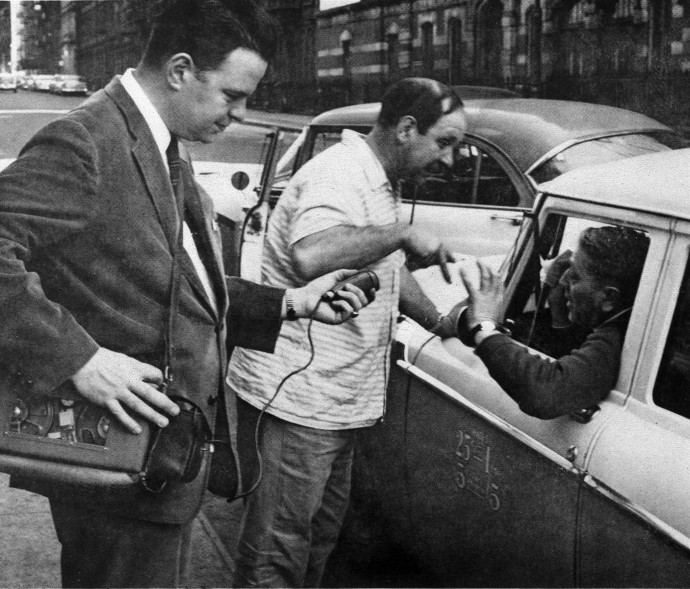 Cab drivers, children’s jump rope rhymes, folk songs, dialects, controversial TV ads, interviews with blacklisted artists and writers during the McCarthy Era — Tony Schwartz was one of the great sound recordists and collectors of the 20th Century. An audio portrait of a man who spent his life exploring and influencing the world through recorded sound.

It was 1947 when Tony first stepped out of his apartment in midtown Manhattan with his microphone to capture the sound of his neighborhood. He was a pioneer recordist, experimenting with microphones and jury-rigging tape recorders to make them portable (some of these recordings were first published by Folkways Records). His work creating advertising and political TV and radio commercials is legendary.

The Kitchen Sisters visited Tony in his midtown basement studio in 1999. He had just finished teaching a media class at Harvard by telephone — Tony was agoraphobic and hardly ever ventured beyond his postal zone. He was there in his studio surrounded by reel to reel tape recorders, mixing consoles, framed photographs and awards — and row upon row of audio tapes in carefully labeled boxes.

Tony passed away in 2008. His collection now resides in the Library of congress — 90.5 linear feet, 230 boxes, 76,345 items — some 30,000 folk songs, poems, conversations, stories and dialects from his surrounding neighborhood and 46 countries around the world.