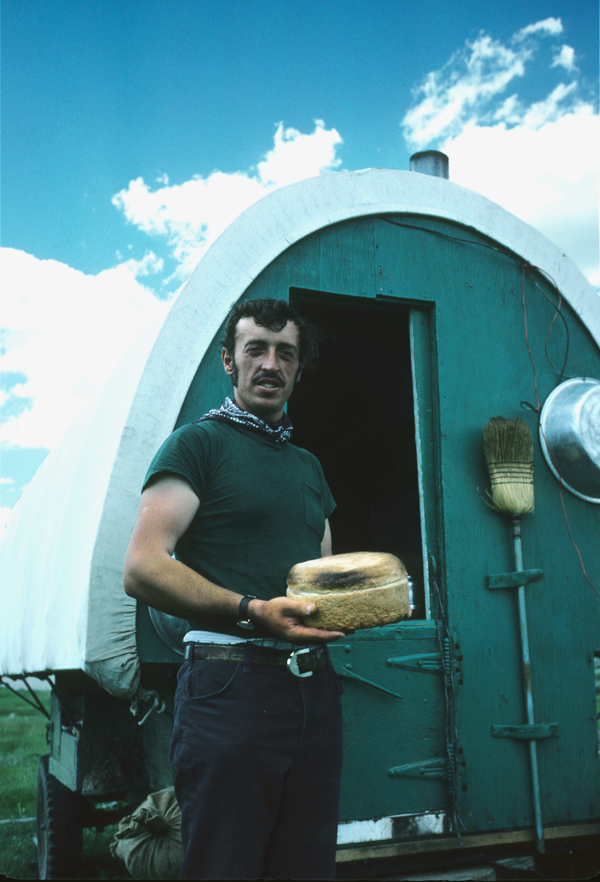 In the 1930s and 40s, hundreds of Basques were brought to the western United States to do the desolate work that no one else would do—herding sheep. Alone for months at a time with hundreds of sheep the Basque’s improvised songs, baked bread in underground ovens, carved poetry and drawings into the Aspen trees, and listened to the Basque Radio Hour beaming to Idaho, Washington, Colorado, California, traditional music and messages between the herders out in the isolated countryside.

“You say Basque to a Westerner and you think sheepherder,” said Mark Kurlansky, author of The Basque History of the World. “In Basque country very few people were shepherds. The seven provinces of Basque country are about the size of New Hampshire. No one has huge expanses of land there.”

“Teenagers were ripped up out of their communities back home, brought to a foreign land, with a foreign language, put up on top of a mountain … crying themselves to sleep at night during the first year on the range,” says William Douglass, Former director of the Center for Basque Studies at the University of Nevada.

Francisco Franco, the Spanish dictator who repressively ruled the country for nearly 40 years, made life miserable for the Basque people, suppressing their language, culture and possibilities. The result was a massive exodus, and the only way to come to the United States for many Basques was to contract as sheepherders. There was a shortage of shepherds in the American West, and legislation was crafted in 1950 that allowed Basque men to take up this lonely and difficult job.

Francisco and Joaquin Lasarte came to America in 1964 from Basque country in northern Spain. Each Lasarte brother had his own flock, and they rarely saw each other or anyone else for months on end. Mostly they ate lamb and bread cooked in a Dutch oven in a hole they dug in the ground.

Hotels like the Noriega in Bakersfield, CA were home in the winter months for these isolated men. They piled into these Basque boarding houses that sprung up in Elko and Winnemucca, Nevada, and Boise, Idaho. The men ate family style — big bottles of red wine, accordion music, conversation and card games.

For 25 years, the voice of the Basque was Espe Alegria. Every Sunday night, sheepherders across the mountains of the American West would tune in to listen to her radio show on KBOI in Boise. Dedications, birthday greetings, suggestions of where to find good pasture, the soccer scores that her husband got off the shortwave from Spain, and the hit tunes from Spain and the Basque region. She would help the sheepherders with immigration issues, with buying plane tickets home, with doctor’s appointments. She did her show for free, but once or twice a year the owners of the sheep camps would give her a lamb. The family would take it home, throw it on the kitchen table, cut it up and put in the freezer.

The Sheepherder’s Ball was the highlight of the year in Boise. The men wore denim, the women wore simple house dresses. Lambs were auctioned off and proceeds given to a charity. Huge platters of chorizo and stew and pork sandwiches were served. The ball continues to this day every December at the Euzkaldunak Club’s Basque Center.