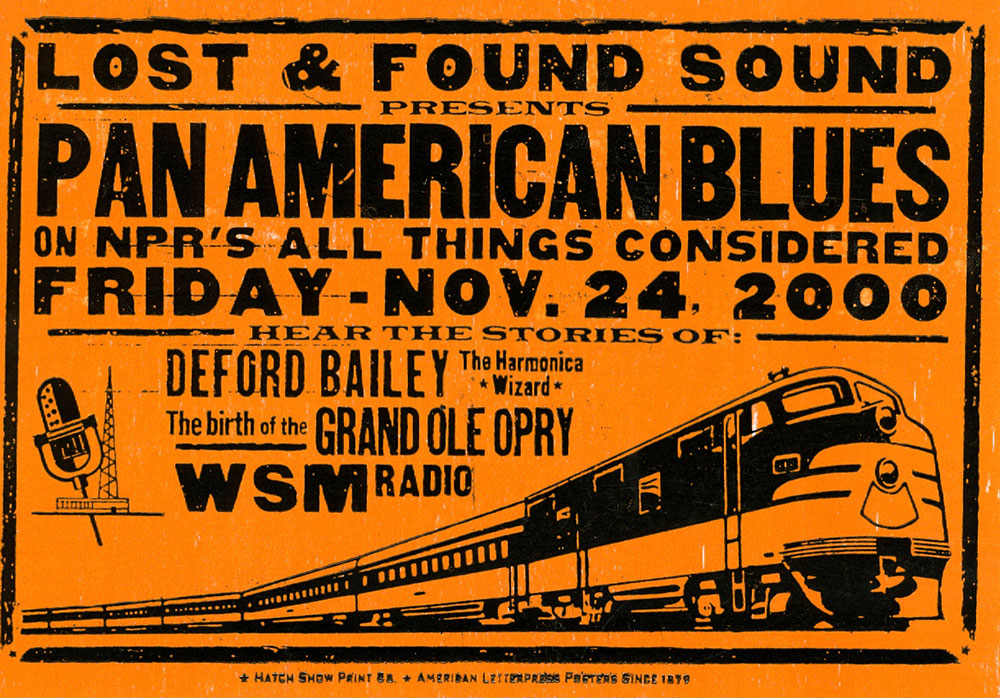 The story of the birth of the Grand Ole Opry on radio station WSM in Nashville, TN and the story of “Harmonica Wizard” DeFord Bailey, the Opry’s first African American performer.

WSM’s most popular show, the Grand Ole Opry, the longest running radio show in the US, started in 1925 as the WSM Barn Dance featuring a wealth of talent from the hills of Tennessee and all around the rural south—Uncle Dave Macon “The Dixie Dewdrop,” Roy Acuff and His Smokey Mountain Boys, Minnie Pearl and hundreds of others performed on the wildly popular Saturday night show.

Starting in 1928, the legendary “Harmonica Wizard” DeFord Bailey was on the show more often than any other person. In fact, one of DeFord’s most popular pieces, Pan American Blues, inspired the announcer to dub the show The Grand Ole Opry. DeFord suffered from polio as a child and started playing the harmonica when he was 3 years old. Four-and-a-half feet tall, always impeccably dressed in a suit, he had the uncanny ability of imitating and incorporating sounds into his harmonica playing—trains, animals, fox hunts. Because it was radio, the audience was unaware DeFord was the only African American among the all-white cast. But when he toured with the other Opry stars he could not stay in the same hotels or eat in the same restaurants. He had to sleep in the car. Sometimes Uncle Dave Macon would haul the back seat out of his car and tell the hotel DeFord was his valet so he could sleep inside his room.

Every night at 5:08 pm from August 1933 until June 1945, listeners to the 50,000 watt WSM radio station would hear the live sound of the Pan American, Louisville and Nashville’s passenger train, as it passed the station’s transmitter tower. They actually had a guy out there holding a mic recording the train every night at 5:08—avid listeners all across the south and Midwest would set their clocks by it.

So we followed up on the sound. We went to Nashville to the Country Music Hall of Fame and the Country Music Foundation, where there are some real Keepers and Collectors of Sounds and stories. And as usual, stories beget stories… the sound of the Pan American train whistle and Radio station WSM led us to the story of the birth of the Grand Ole Opry, the oldest continuing running radio program… which led us to the remarkable story of the Grand Ole Opry’s first (and for many years only) African American performer, Harmonica Wizard Deford Bailey.