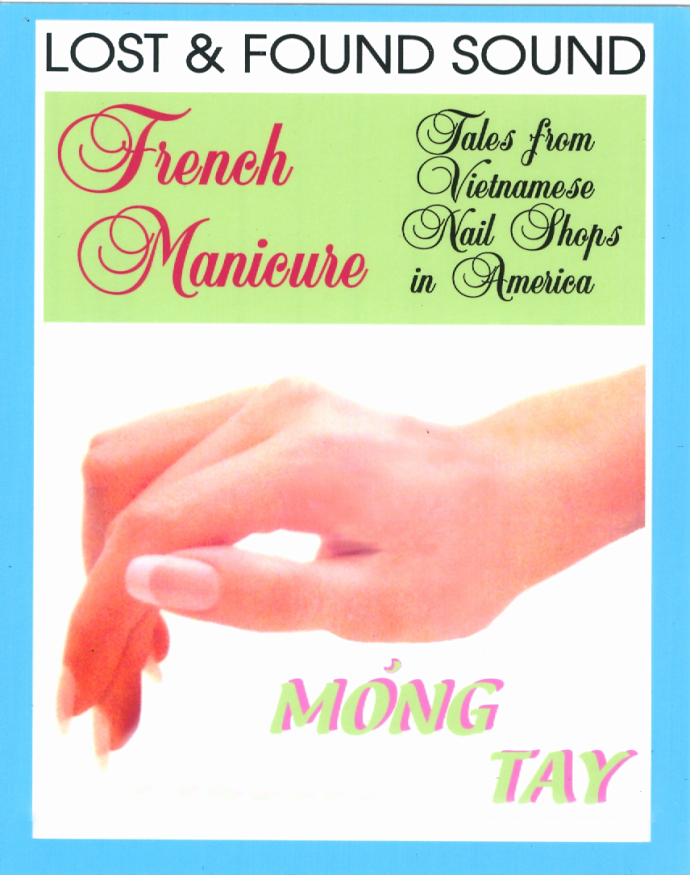 In honor of the many people who work in nail salons across the country who are struggling to keep their businesses from going under during these long closures, The Kitchen Sisters Present French Manicure —Tales from Vietnamese Nail Shops in America, a story produced as part of the Lost and Found Sound series on NPR.

The training is short – sometimes as little as three months. They not only acquire a new set of professional skills, but a new identity as well. Sound plays a part in merging into a new life—American TV and radio, language study tapes, naturalization tapes, the soundtrack of new citizenship and a new life. Then there are the lost sounds of home – music cassettes brought from Vietnam, Vietnamese videos from the Saigon bookstore in a San Jose shopping mall. These audio artifacts merge with stories from manicurists in Vietnamese salons. One such story comes from Shirley Nguyen at JT Nails.

Shirley: I came here in 1983. Just by myself at 14. I escaped by boat to Thailand, to Philippines, then came here. Supposed to be a whole family come together but we separate to small boats. Some make it some didn’t make it, get caught by the communists. We separate. And I was wondering, I asked “Where’s my mom, where’s my mom?” The owner say, “She will be here, she will be here.” Gone.

As she polishes, she tells her stories – how she got here – what to do about dry cuticles – how she learned her English from tapes – why French Manicure is better than silks – how she lost her family in Vietnam – about the “sad songs” of Vietnam and the sounds of Saigon streets. About how she got her name.

Shirley: [In the U.S.], I lived with a foster parent. I have my own room and a TV she let me have it. Usually I watch a lot of Shirley Temple. I like Shirley Temple a lot. I watch a lot of her movie. She’s happy. She’s dancin’ tap. And she’s very pretty lady … When I become US citizen I change directly to Shirley Nguyen. My Vietnamese name kind of like difficult to pronounce, Hang – H-A-N-G. I changed to Shirley.”