Lisbon is a city of plazas, parks, overlooks and gardens. For more than a century, these beautiful public spaces were graced by Art Noveau and Moorish-style kiosks — small, ornate structures that provided chairs and shade and served traditional Portuguese snacks and drinks.

These quiosques de refrescos (refreshment kiosks) were the heart of public life in the city. But, under the long dictatorship of Prime Minister António de Oliveira Salazar, which started in the 1930s, laws actually discouraged public gathering and conversation. Many restaurants closed down and the kiosks ­­fell into disrepair and all but disappeared.

That was, until Catarina Portas, a native of Lisbon, former journalist and entrepreneur stepped in.

“From the 19th to the 20th century, there were some hundred different kiosks in Lisbon. The city was full of them in different colors, different designs,” says Portas. She used to take walks around the city and see these “sad, abandoned structures,” she says. “I started to think, How could we bring this to our times?”

So Portas began hunting down these kiosks — some still in place but boarded up or neglected, others in storage. She teamed up with architect João Regal to restore the buildings – not just to their former glory, but to their former place of prominence in Lisbon’s public spaces.

“We went to the city council with amazing photographs of the old kiosks, and we prepared all the old drinks and made them taste the drinks,” Portas says. The pitch worked —­­ Portas is fairly sure it was the drinks that convinced the council members. Their first three kiosks opened in 2009.

The kiosks offer affordable and traditional drinks and snacks, conversation and community – and also employment in a country struggling with the staggering levels of unemployment and recession gripping much of western Europe.

Leite Perfumado And Other Drinks Of Old

The first kiosk in Lisbon, which opened over a century ago, was called The Elegant. “That was the official name,” Portas tells us. “But people started calling it La Bóia, ‘The Buoy,’ because it was always open and people were around and the kiosk could save them with a drink.”

“Our parents and grandparents used to drink these natural drinks, handmade. You can’t find them anymore,” Regal says. They started to try all these recipes, some of them hundreds of years old. All of them were loaded with sugar. “Lots of sugar, very syrupy, very syrupy,” says João. “At the time there was no way of keeping them cold, so the sugar was a way to preserve the drinks. We had to adjust the recipes.”

They also serve ginge con ellas, a liquor with ginger that comes in a beautiful bottle. “You drink it in very, very small glasses,” Portas explains. “The person who is serving always asks, ‘With her or without her?’ ‘With her’ is with the cherry in the glass.”

It wasn’t just the menus that Portas and Regal revived — they’ve also worked to restore the kiosks’ unique architectural aesthetic.

“This kiosk has been here forever, nearly 100 years old,” Regal tells us, as he takes us from plaza to plaza —­ from the busy Luís de Camões to the quieter Praça de Sao Paulo to Praça do Príncipe Real —­­ showing off the kiosks he’s helped restore. “This kiosk is bright pink, half wood, half stone. Six sides, hexagonal. And it has kind of this Moorish influence.” The design is characteristic of the Art Nouveau style of the late 1800s and early 1900s, he explains, but it also draws from Byzantine architecture.

In the beginning of the 20th century, the beautiful kiosks “played an important role in the street life of Lisbon,” says Marina Tavares Dias, a Lisbon­-based journalist who has written several books about the city’s history. “Kiosks had a bit of everything – newspapers, lottery, drinks. You always meet somebody you know because you are in the center, outdoors.”

When Salazar came into power in the 1930s, the kiosk culture started to fade, she explains. Salazar’s right-wing, dictatorial government, the Estado Novo, which held strong for nearly four decades, discouraged the café culture, intellectual debate and public gathering that has long been a mainstay of life in the city. The Salazar regime urged people to stay out of public life, stay home, drink your wine, eat your bread, and don’t come to the plazas and have a coffee or agitate. During this era, Portugal’s most famous singer, Amália Rodrigues, even came out with a tune called “Casa Portuguesa,” in which she sang about what a beautiful thing it was to be humble and poor, to stay at home and not expect a lot, and to be proud of your life as a Portuguese person.

“The Salazar regime goes on until 1974, which is the end of the Estado Novo,” saysEllen Sapega, a professor of Portuguese language and culture at the University of Wisconsin-Madison. “In the 1980s, Portugal joined the European Union, and people wanted to get rid of things that were equated with the stuffiness of the Estado Novo and to embrace a new, more modern idea of Portugal,” she says. “That’s the time when the fast food restaurants enter into Portugal and global brands, and more supermarkets became chain supermarkets.”

The old-­fashioned kiosks did not fit into the city’s urban renewal plans. “The kiosks just shut down and were abandoned,” Regal says. “They’d become dirty places, not so proper. They weren’t elegant anymore.”

But as the years passed, the city council began to re­think these ideas. Portas and Regal’s kiosk project was so successful that it inspired the government to adopt what it calls “The Kiosk Strategy,” and start restoring more kiosks, as well as gardens and bike paths, throughout the city. It was a concerted effort to bring public life back into the public plazas, combat crime, and revitalize neighborhoods and local food traditions.

Lisbon’s city councilor, José Sá Fernandes, even helped set up a contest asking for proposals to reopen some of the old kiosks. “The Kiosk Strategy is a way people begin to use the squares and the gardens that three years ago, four years ago, nobody used,” says Fernandes. “The idea is to put in these places some small kiosks to serverefrescos to drink and eat good things. More people in the places, less crime, more secure are the places.”

At the bustling navy blue kiosk in the Plaza Luis do Camoes, 26­-year-­old Miguel Mushadino, who works the late shift, says the economic crisis gripping Portugal plays out in front of the kiosk.

“I know a lot of people, they are having a hard time because of the crisis,” Mushadino says. “It scares me a little bit. A lot of friends of mine, they are already going to other countries. Because even our prime minister — he’s asking us to go away, he is telling young people to leave the country and find their fortunes elsewhere.”

Then, he points out some local customers. “Those people that you are seeing here at the table, they’re the locals,” he tells us. “All of them they live here, come here every day. They just drink one coffee, but they stay here midday until 6 or 7 at night. Sometimes people are even ashamed, but they just have money for one coffee.”

Sapega —­­ the professor at The University of Wisconsin ­­— says she divides her time between Madison and Lisbon. “In the neighborhood where I live in Lisbon, a kiosk opened about four years ago,” she says. “This is a neighborhood that would probably never have had a kiosk before. There was a garden, but it was in a state of neglect.

“The day they opened the kiosk was a hot day in the beginning of the summer. All of a sudden, the lights came on and you could see everyone in the neighborhood drawn into the garden. The kiosk immediately became the gathering place.”

The last kiosk Regal takes us to is a beautiful purple restoration on the edge of a neighborhood park. “Now we’re heading to Praça Das Flores, The Plaza of Flowers, in central Lisbon. It’s a quiet little square where all the old ladies go. They leave notes for each other, they leave the keys. They feel it’s theirs. That’s the Kiosk Strategy.”

2) Heat the milk, honey, nutmeg and cinnamon in a small saucepan on medium heat.

3) Once the mixture has reached an even consistency, add it to the tea in a cup.

From The Drunken Botanist by Amy Stewart

Bring the water to a boil, and pour it on the fern.  Let stand for 30 minutes.  Strain and add the orange flower water and sugar.  Reheat, if necessary, to dissolve the sugar.  It will keep for a few weeks in the refrigerator and longer in the freezer. 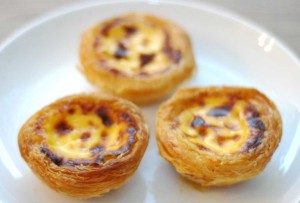 ASSEMBLE AND BAKE THE PASTRIES 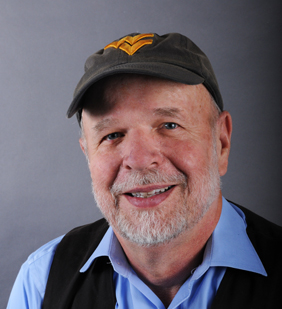 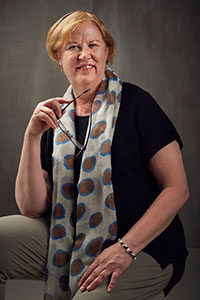 A look at A Vida Portuguesa

(Video from the Portuguese Daily View)

A Vida Portuguesa, or The Portuguese Life in English, began with a journalistic investigation. Catarina Portas wanted to know more about Portuguese daily life during the 20th century and ended opening a store in Lisbon where old and traditional Portuguese products can be found, telling stories and bringing back memories.