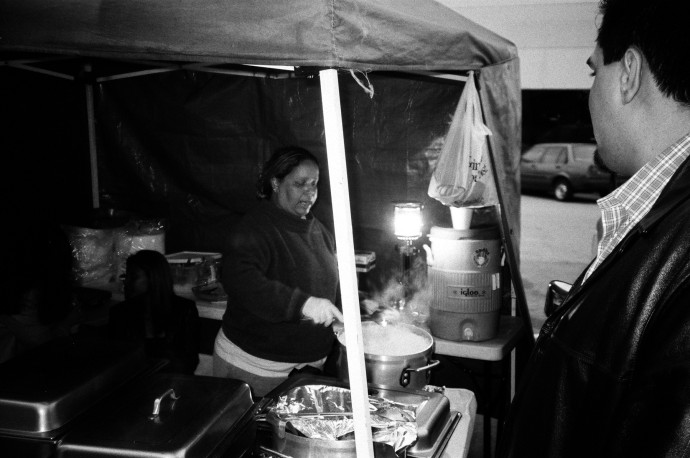 A lot of Kitchen Sisters stories are born in taxicabs. The Hidden Kitchens series was conceived in the back of a Yellow. Davia lives in San Francisco and hates to drive. She started noticing that every time she got into a Yellow cab, the driver was from Brazil. And not just from Brazil, but from the same town in Brazil: Goiânia. Inevitably, these cab ride conversations turned to music and food.

That’s when the story of Janete emerged, a woman from their same hometown, who comes every night to an abandoned industrial street outside a cab dispatch lot and sets up a makeshift, rolling night kitchen — hot salgadinhos, bollinhos, pão de quejo. She cooks the food of home. By dawn, Janete and her blue tent are packed up and gone.

One night around midnight, we decided to go in search of Janete’s secret cabyard kitchen. A driver had given us a sketchy map and told us to park in the cab lot and walk from there.

There, under a streetlight and a small blue tarp, four drivers were laughing, huddled over big plates of food, eating in Portuguese. Brazilian music spilled out of a parked cab. Janete, shy and smiling, presided — a hidden kitchen vision.