The Building Stewardesses: Construction Guides at the World Trade Center 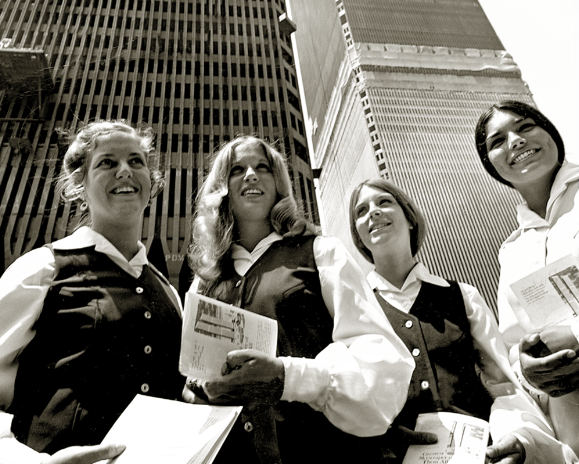 As construction commenced on the largest building project since the pyramids, questions and controversies swirled around Lower Manhattan. How tall? Why two? What’s a slurry wall? A kangaroo crane? Where are the small businessmen going to go? What’s a world trade center, and who needs it anyway? Guy Tozzoli, the Port Authority visionary behind the building of the Twin Towers, had an inspiration—”Construction Guides.” Friendly co-eds in mini-skirt uniforms were posted at corner kiosks on the site to inform an inquiring public and put a pretty face on a controversial issue.

This story is part of the Peabody Award winning Sonic Memorial Project, an intimate and historic documentary commemorating the life and history of The World Trade Center and its surrounding neighborhood, through audio artifacts, rare recordings, voicemail messages and interviews. The Sonic Memorial Project was produced by The Kitchen Sisters in collaboration with NPR, independent radio producers, artists, writers, archivists, historians and public radio listeners throughout the country.

The Sonic Memorial Project began in October 2001 as part of the Lost & Found Sound series. We opened a phone line on NPR for listeners to call in with their stories and audio artifacts relating to the Sept. 11 attacks and the history of the World Trade Center. Hundreds of people called with testimonies and remembrances, music and small shards of sounds.

These stories and contributions from listeners across the country can be heard at the Peabody Award-winning website SonicMemorial.org where you can explore the archive, contribute your own sounds and stories, and immerse yourself in the Sonic Browser, an interactive soundscape of stories and audio fragments. 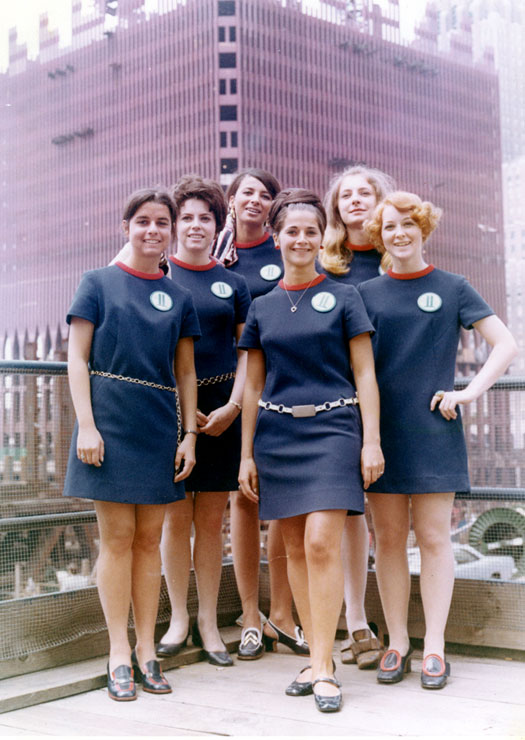 “I started at three dollars an hour, which was still a lot of money for a summer job. I think that whoever had the idea must have been someone with an incredible amount of insight and understanding of human nature. Because to think that you could find young girls like this, and instill us with that sense that we were almost as invincible as the building. We were the building, we were the World Trade Center.”
— Elizabeth English, who worked as a guide at the observation deck 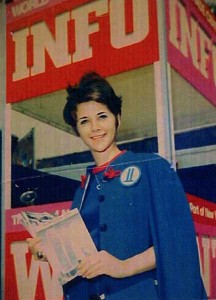 “Oh, the uniform was fantastic. I loved that uniform. They took us to Evan Piccone. And for a young girl in college this was great, to have something custom-made. The uniform was a straight navy blue, and they had them short, and it was piped in red and had a chain-link belt, a white belt with a silver buckle in the front. It had a cape that was also navy blue and piped in red, and in the front it had a red frog to close it. I used to feel so proud wearing that uniform. In the beginning when I used to get on the PATH in the morning, no one recognized me. But after being in the information booth for about two weeks, the minute I got on the PATH train in the morning, everyone recognized that uniform, and they would stop and talk to me.
– Olivia Virazzi Zdanowiz

“We had walking lessons from the charm school lady. You were supposed to lean back, and you were supposed to walk with one foot in front of the other, like this. Instead of just going up steps as you normally would, you had to finesse the step, as she would say.”
— Elizabeth English

“They constructed a platform over the construction site and every half hour or hour one of the guides would go onto the platform with a microphone, and we would give a talk. There were two information booths so we rotated. We did our time on the platform, then you went to one information booth and then you walked down a few blocks and we went to the other information booth, where we handed out brochures…gave a lot of directions too. I don’t know if we gave the right directions because we weren’t from the city. So I’m sure we sent a few people on wild goose chases.”
— Olivia Virrazzi Zdanowiz 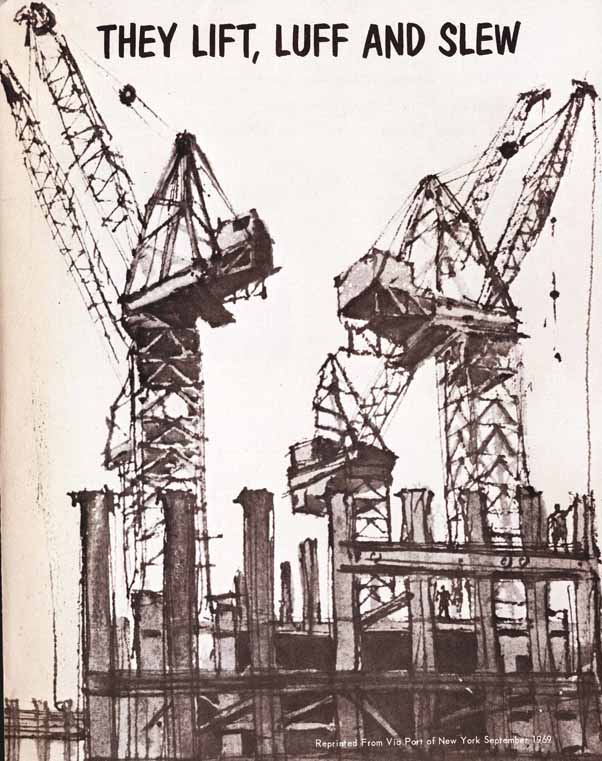 “The cranes would lift themselves up… One was in each interior corner of each tower. As the tower shell outside grew and the steel structure inside grew taller, the crane jacked itself up so it was still operating above each corner of the tower. Once the tower got all the way completed to the top, one of the cranes was used to disassemble and lower the other three cranes down the side and then the fourth crane was disassembled into smaller pieces.”
— Olivia Virrazzi Zdanowiz

” Well, Guy had a unique role, in that not only was he responsible for the ’64-’65 World’s Fair, but at the same time the World Trade department was starting and they were starting to get various concepts for what the Trade Center would look like, and he would be involved in that as well. He was a dynamic individual, there was no question about it. I mean, people who first encountered him had to be extremely impressed and as they got to know him more had to be even more impressed. He was a fellow who could come in with a new idea every day.”
— Al Pettenati, the guides’ manager

“When King Kong was going to be filmed, I came up the escalator to the concourse level of the lobby, and I looked out, and there was a giant ape’s head on one corner, a huge hand in another area, his feet were somewhere else. And I remember thinking that this would be a heck of a day for somebody who had decided to quit drinking.…They did advertising on the radio, and more than 50,000 people came to the plaza to be extras. It was a mob scene! It got so out of hand the Port Authority finally pulled the plug at 3:30 in the morning.”
— Judith Broverman, Guy Tozzoli’s assistant 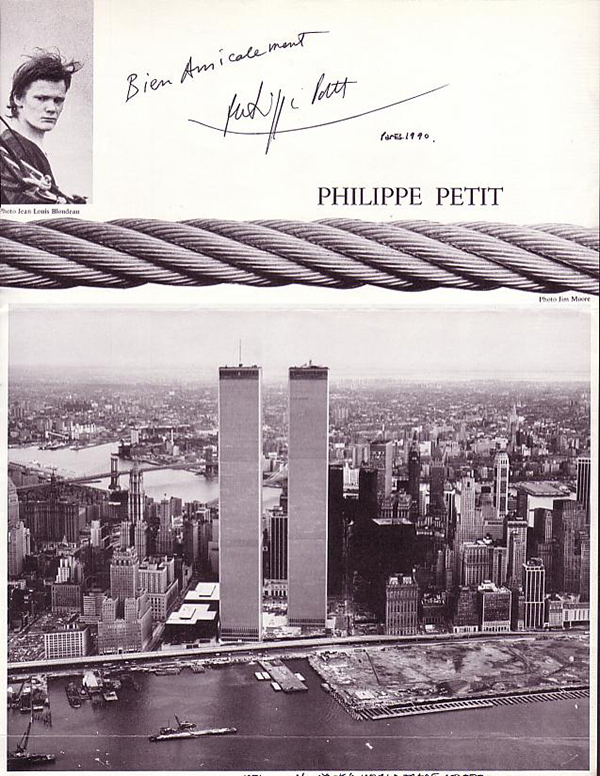 Philippe Petit autographed a photo for one of the stewardess

“…1974, this very nice young man called Philippe Petit showed up in my office. And he identified himself as a French journalist. He said to me, you know, ‘I want to do a story about the World Trade Center.’ And well of course I was happy to have stories about the World Trade Center. I needed to rent millions of square feet, and anything that people would do in France, that was good, too, because I wanted it to be international people also, to be cognizant of the World Trade Center and what it stood for. So, he came back to see me day after day, and later on I realized that somehow or other, whenever he talked, the subject always got back to how did the building move in the wind. I tell him they move like a snake. I didn’t know, but Philippe Petit was making a plan.”
— Guy Tozzoli