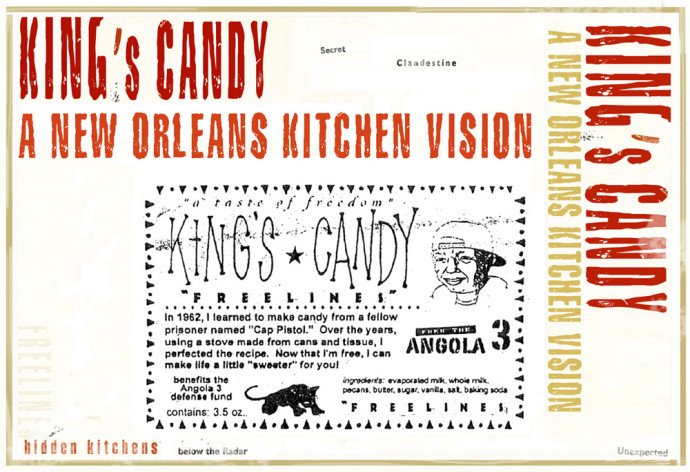 Robert King Wilkerson (aka Robert Hillary King) was imprisoned at Louisiana State Penitentiary in Angola, Louisiana for 31 years. Twenty-nine of those years he was in solitary confinement. During that time he created a clandestine kitchen in his 6×9 cell where he made pralines, heating the the butter and sugar he saved from his food tray over a tiny burner concocted from a Coke can and a toilet paper roll. King and two of his friends started a chapter of the Black Panthers in Angola Prison during the 1970s. King’s case was overturned in 2001 and he was released. He lectures around the world and makes candy — which he called Freelines — to bring attention to issues of prison reform and the plight of The Angola Three. King was living in New Orleans during Katrina, refused to leave his dog, and weathered the storm in his apartment. Two weeks in, his friends from Austin bought a boat and went in to get him. 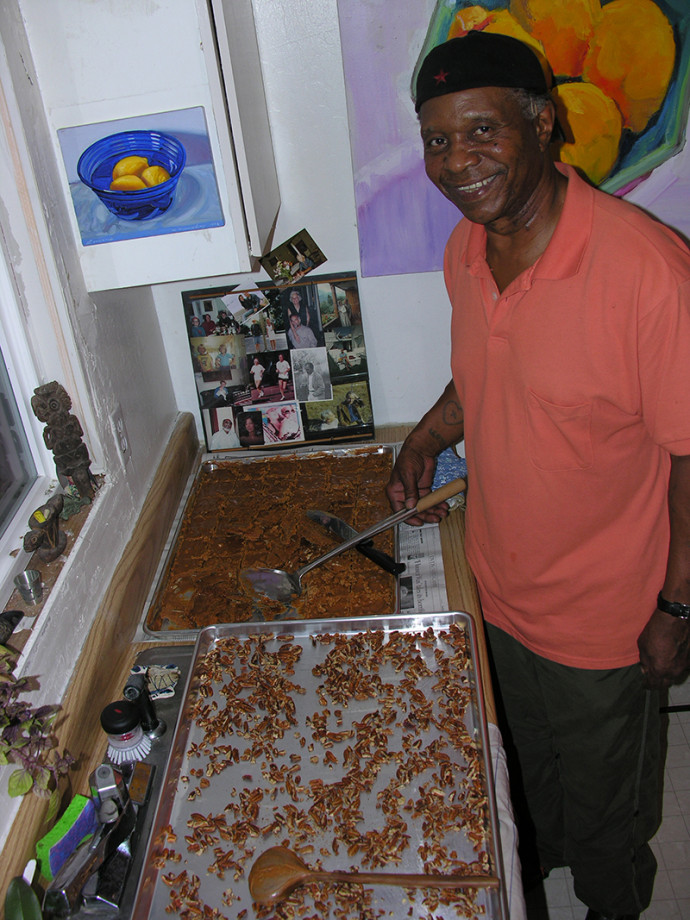 King’s Freelines
1/4 pound butter
5 pounds sugar
1/2 gallon or 3 cans evaporated milk
1 gallon whole milk
1 1/2 ounce vanilla
1 teaspoon salt
1 teaspoon baking soda
1 1/2 pounds pecans
In a huge pot put all ingredients except pecans. Heat on a high fire, stirring continually so the mixture doesn’t boil over. Stir until the mixture is a caramel.
Pour onto large greased sheet pan, then add pecans. Allow to cool a bit, until you can handle it.
Using a spoon, whip the mixture. “Talk to it, show love to it,” says King.
Either leave completed mixture in sheet pan to cool entirely, or before it’s fully whipped, use a spoon to remove the mixture into smaller rounds, placing them on a second sheet covered in wax paper.
King warns that “candy has a mind of its own” and varying temperature and humidity can effect the result. Makes 25 3 1/2-ounce pieces 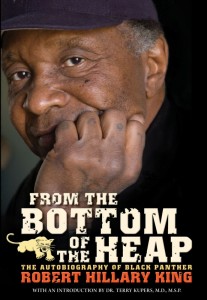 King’s book, From the Bottom of the Heap: The Autobiography of Robert Hillary King, tells the story of King’s remarkable life: his childhood in Louisiana, his teenage hobo years in Chicago, his pursuit of a boxing career, and time spent in solitary at Angola Prison. Buy it from PM Press.