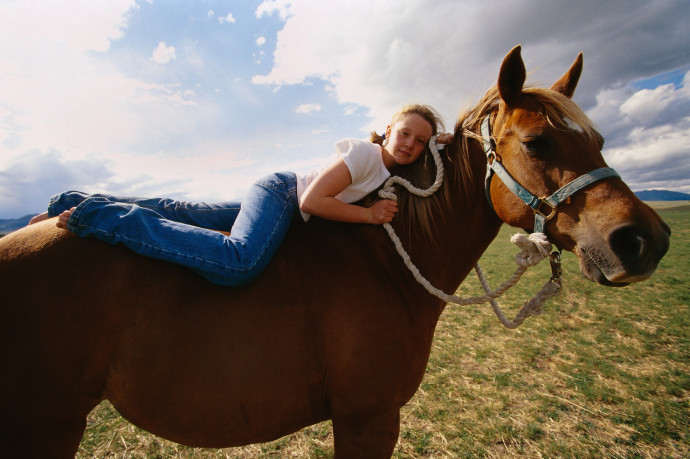 “Horses, unicorns and dolphins are kind of like a girl’s fantasy,” says eleven-year-old Sally Rose Reiker. Sally is a horse girl. She’s been riding since she was 6 months old strapped in a baby carrier on her mom’s back. “Every girl wants a unicorn. Every girl goes through the stage where they want their own horse.”

The idea of creatures that possess the imagination of young girls is something that intrigues Laurel Braitman, a graduate student in the history of science at MIT who writes about animals and what we think about them.

“Horses, unicorns and dolphins are borderland creatures; gateway animals to other worlds,” says Braitman. “They help us imagine other ways of being. They let us be cowgirls and oceanographers and mermaids and princesses.”

“We don’t really like princesses that much,” says seven-year-old Allie McKenzie. Allie is one of triplets, she and her sister are in love with horses and dolphins. Her brother likes sports. “Princesses are not as exciting as horses and animals and the show called Flipper.” 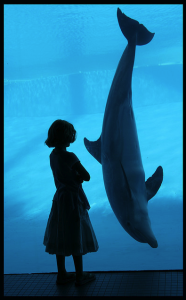 “Dolphins capture your heart,” says Chelsea Berman, 21, who works at the Monterey Bay Horsemanship Center where she began volunteering when she was 13. Her love of horses is only rivaled by her love of dolphins. “I swam with dolphins. When they take off and swim and they’re just pushing you with their nose or they’re pulling you with their fin. It’s power.”

“It’s like the mermaid fantasy, that you can just live in the ocean and not have to have anything,” says Georgetown University Professor Janet Mann who has been studying bottlenose dolphins for 23 years.

Mann has gotten hundreds of letters from girls who are in love with dolphins. Sometimes the girls’ mothers write for them. “Hi Janet. My second grade daughter Emily is crazy about dolphins. She has to do a small biography project at school. While her classmates are choosing the likes of Thomas Edison and George Washington, she wants to do Janet Mann, dolphin researcher.”

“Sometimes they say they want to be me,” says Mann. “I think it’s like what I went through as a girl when I first wrote to Jane Goodall. I just wanted to do what she did.”

Dr. Mann observes that a lot of girls with childhood illnesses become very interested in seeing dolphins before they die. One little girl from central Australia who died at age eight, requested that her ashes be scattered with dolphins.

“It’s this notion of being able to move like that through the world,” says Mann. “That’s what both dolphins and horses have in common. Sleek, power and speed.

Horse Power that has a Heart

For Sally Reiker, horses are more than just a hobby—they’re something she can’t live without. “When I look at a horse I look into myself. I see myself in their eyes. It’s just who I am. I want to be free and I want to leave my worries away from me just getting on and riding and leaving my bad memories on the ground. 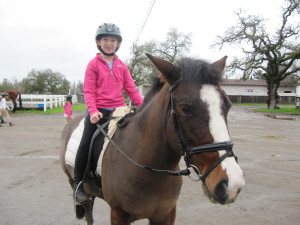 Long-time horse woman Domenique Gioia says, “To be in control, or out of control on a galloping horse is a wild feeling. You are one with it. You just feel the power underneath you. And that’s part of the attraction.”

Peggy Orenstein is the author of “Cinderella Ate My Daughter: Dispatches from the Front Lines of the New Girlie-Girl Culture.” There’s always been a lot of speculation about why girls love horses. Is it about power, is it some Freudian phallic thing?  What is it? I think  horses and unicorns and dolphins are the girl expressing her own power through these very dynamic, strong creatures that they’re identifying with. They’re all active, they’re all sources of power and motion and transformation.”

National Velvet, collections of Breyer model horses, posters, bedspreads, t-shirts, movies, stuffed animals, anything with a horse on it. Eleven year old Danielle Altizio thinks about horses all the time. As she pours feed into a bucket she talks lovingly about her horse Grendal. She spends every minute she can with him. “He’s just always there if I need him. I just know that we can do it and that we’ll do well.”

When Chelsea Berman is confused or frustrated she turns to her horses. She believes that much of the attraction for girls is that horses don’t judge you. “Horses don’t talk back. They don’t have mean things to say. They’re not going to yell at you if you didn’t clean your room or give you the cold shoulder if you forgot to return a phone call.”

Chelsea’s boy friend doesn’t understand her intense feelings about horses. “He’s a car freak,” Chelsea tells us. “He loves the power that a car gives him. “Horses are similar, big machines, but this is the horse power that has a heart.”

When champion barrel racer Caterina Tadlock, was a student at Southern Oregon Community College, one of her writing teachers asked what it was with girls and horses. “He posed the theory that it was similar to taming a bad boy,” says Caterina. “I really disagree with that.”

Caterina wrote a paper for the class, “The Mystery of Girls and Horses,” which was also published on her sister’s website, The Ultimate Horse Site. In it she talks about how the image of the horse has changed. She says that in the past mostly men rode and broke in horses. Women didn’t have as many opportunities to form relationships with the animals as they do now.  “Horses used to be considered tools for cowboys, a means of transportation for soldiers, and a matter of business for racehorse owners,” she writes. “Today, horses are mostly companion animals kept for pleasure rather than work or business purposes.”

The currying, the cleaning of the hooves, the mucking of stalls, the brushing of the mane and tail, the feeding of the horse.  Girls are attracted to achieving the skills and level of competence it takes to care for a horse as well as to the nurturing  aspects of the work.

“What this seems to be turning into in this generation is online pets,” says Peggy Orenstein who has been observing girls and their toys and obsessions.  “There’s this whole world of online horses.  It’s in its little stall. You have to feed it and brush it and change it’s hay, do all the things you would do with a real horse.   And if you don’t, your horse starts to die and its little life meter runs out.”

Leah Creatura is a children’s book buyer for Bookshop Santa Cruz. “For me a lot of the horse craze was that I wanted to be an Amazon princess because I wanted to be Wonder Woman.” When she was a girl in the 1970s Leah read about Wonder Woman in her mother’s Ms. Magazine and then the television series came out. Wonder Woman is an Amazon princess and her mother is Hipolyta. She’s from an island and there are no men on the island.

Peggy Orenstein notes the importance of having a place where what it means to be a girl is to be courageous and strong and the only one able to do this impossible task. “It’s the girl who can ride the horse, it’s the girl who’s Wonder Woman. It’s the girl who tames the unicorn.”

Unicorns—The Dreamland of the Horse

Along with her passion for horses and dolphins, Chelsea Berman loves unicorns. “They are like the whimsical, the fantasy, the dreamland of the horse,” she relates. 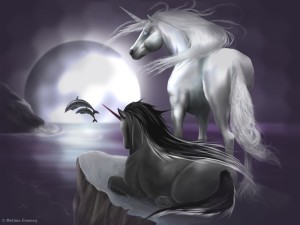 Unicorns are magical. For eleven year old Jennifer Green they symbolize dreaming and achieving. “I know that unless you believe in them they won’t show themselves to you,” she said. “They’re like a very pure spirit.”

Girls and unicorns have been linked in stories, art and on tapestries since at least the Middle Ages. One of the iconic myths about girls and unicorns has to do with the unicorn hunt relates Nina Shen Rastogi in her article for Slate magazine entitled “What is it About Girls and Unicorns?  It’s More than Just the Horn.” In this myth the only way that a hunter can lure the unicorn is to bring out a pure young virgin, have her sit in the woods. The unicorn is attracted by the maiden’s innate goodness, her purity, beauty, and youth.

Rastogi says, “I think for many young girls, there’s a fantasy that some day you will be recognized as the secretly beautiful, magical thing that you are. It’s the notion that the unicorn will be attracted to something ineffable about you, secret from the rest of the world.”

When you’re small you’re more imaginative and open to possibilities says Laurel Braitman. “That’s maybe the most beautiful part of girlhood, knowing that you can’t actually be all these things but not being entirely sure.”