Willie Nelson and Dallas-born actress Robin Wright, along with some wild and extraordinary tellers, take us across Texas and share some of their hidden kitchen stories. Gas station tacos, ice houses, the birth of the Frito, the birth of 7-Eleven, the birth of the frozen margarita, and more.

“Hi Sisters.  This is Brian Gooding.  There’s a gas station in Dallas called Fuel City.  They have buffalo out there and cows grazing right down on the levee within sight of downtown.  There’s a little bitty window on the side of the service station and they have a taqueria in there.  Texas tacos.  They cook all night long.  You got to get there.” 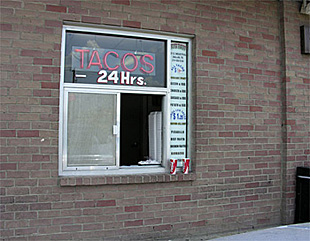 Following up on Brian Goodling’s call to our Hidden Kitchens Texas Hotline, we pulled into Fuel City–a ten-acre oasis of fuel pumps, big rig parking, fountains, bikini-clad girls tanning by the pool, oil wells, long horn cattle, surrounded by the downtown Dallas skyline and a swirl of interstates.  It doesn’t take long to see that owner, John Benda, has a vision. 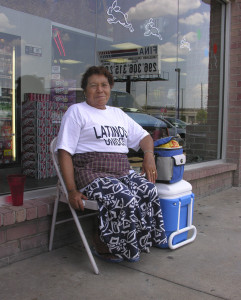 “I’m in the business of selling gas and beer and thought it would be neat to have an attraction–show what Dallas looked like 100 years ago,” John tells us.  “I put an oil well over here and I’ve got some of the biggest longhorns in the world out back.  I’ve got waterfalls shooting up and girls sitting out by the pool models.  They just lay at the pool and wave at the customers.  From the interstate people driving by can see the girls at the pool.  It’s probably more of an attraction than the longhorns out back.” At Fuel City, truckers come by 24/7 to gas up, eat, park their trucks, and stay for the night. Inside, the air-conditioned aisles are piled high with Bud Light and Shiner beer.  The store is packed with people standing in line to get their Friday paychecks cashed. Out front, teens, truckers and tourists crowd around the taco window.  The bikini-clad pool models are waving. Margarita Rocha sits in a folding fair watching the action.  “She’s got this little bitty ice chest and she’s selling these hot tamales to people coming by,” says John. “On Friday and Saturday nights I have a DJ outside jamming and playing music.  It’s the place to be seen.”

We were in San Antonio looking for chili queens when John, our cab driver, pointed out the ghost of an ice house on a neighborhood corner. “The old ice houses were the first to serve beer, iced down,” he said.  Part tavern, part town hall, ice houses have been a South Texas tradition since the 1920s.  We decided to take an ice house detour and headed for Sanchez’s. 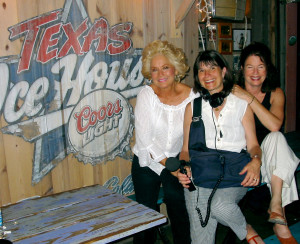 “Sanchez’s is a hidden place,” John told us.  “It’s underneath the bridge, underneath the freeway.  If you drive by you will not see it, you have to know where it’s at or you’ll miss it.  It gets packed at night.  I mean, it’s an old, old hole-in-the-wall place.  You have your lawyers, judges–oh man! Everybody comes here!“

Before refrigeration, neighborhoods had ice houses that stored and distributed block ice to people for cooling their home iceboxes.  Over time, the ice houses began to diversity–serving iced beer and a little food.  They became cool, air-conditioned spots where neighbors and families could sit, talk, play dominoes, turn up the jukebox, maybe eat some chicken wings, dance on the slab outside.

Rhett Rushing from UTSA’s Institute of Texan Cultures shared some ice house history with use.   “In the 1800s, before the invention of the ice machine, ice was harvested from northern lakes–Wisconsin, Minnesota.  Wherever you had thick ice.  It was a major industry.  They would saw the ice into blocks, pack it in sawdust, and haul it in ships.  Sometimes the  ice even made it to Galveston before it melted.  In those day only the very rich and elite had ice in Texas.

When the ice supply from the north was cut off during the Civil War, the first ice machine was smuggled into San Antonio by way of Mexico.  The ice makers built heavily insulated neighborhood depots where the ice was stored and then delivered to local customers.  These depots became neighborhood hubs because if you put your bench up against the wall of the ice house, it was five or six degrees cooler than the Texas heat outside.  Ice houses eventually began selling ice cold beer and food, attracting people like a magnet.

With the coming of refrigeration and air conditioning, the ice houses began to fade.  Once a cornerstone of every neighborhood in San Antonio and Houston, today they are rapidly diminishing, an endangered Mexican-German-Tejano-Anglo tradition.

The Birth of the Frozen Margarita

Mariano Martinez’ father made legendary margaritas in his restaurant in Dallas in the 1950s.  So when Mariano opened his first restaurant in 1971, he thought he had it made when his dad gave him his secret recipe.

But during the first week customers complained.  The margaritas were inconsistent.  They weren’t cold.  Mariano was making them one at a time like his dad had in his tiny place.  “We just couldn’t keep up,” Mariano told us.  “I had sleepless nights.  I saw my dreams evaporate.” 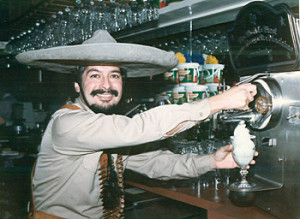 The next morning he stopped at a 7-Eleven store and saw the Slurpee Machine sitting there.  “The light bulb went off in my head.  I called the Southland Corporation, the owner of the 7-Eleven stores.  They were very guarded and wouldn’t share with me where to buy a Slurpee machine.  So I bought a soft-serve ice cream maker.  We souped it up like you would a car.  That was unique.”

“I had no idea it would end up in the Smithsonian.  It’s got a big sign on it, World’s First Frozen Margarita Machine.  It’s been much greater than anything I could have ever dreamed about.”

The Birth of Fritos

We were in Dallas, recording at Fuel City.  We were strangers in a strange land.  Where to go?  Our pal Chris Strachwitz, founder of Arhoolie Records, had told us to call his pal, Alan Govenar, founder of Documentary Arts in Dallas.  We were eating barbecue and pie with Alan and his wife, Kaleta Doolin, when Kaleta broke the news.  Her father, it seemed, had invented the Frito.

It was 1932.  Charles Elmer Doolin had a bakery in San Antonio and he wanted to try to make chips that didn’t go stale.  He found such a chip being sold in a gas station, made by a man from Mexico who lived in San Antonio.  He bought the recipe, patent, and 14 of the man’s regular customers. 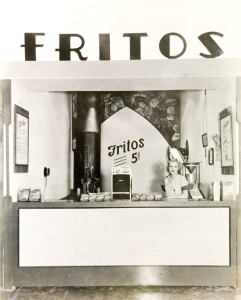 Doolin and his mother began making the chips by hand in his kitchen, using a potato ricer, bagging them and selling them to gas stations.  “His life was one big hidden kitchen,” his son-in-law Alan Govenar told us.  “Doolin had kitchens in his factory and in his lab, and his home kitchen was filled with test tubes and beakers.”   Trough these kitchen experiences, Doolin also invented the Cheeto.

The secret ingredient in Fritos, Kaleta Doolin says, is her father’s own special hybrid of corn.  He hired farmers throughout Texas to plant his varieties until e found the taste he was looking for.  He and his brother Earl applied Henry Ford’s idea of the assembly line to the manufacturing of the Frito.  Doolin had big plans for this chip.  He opened a Casa de Frito restaurant in Disneyland in 1955, and another one in Dallas.

“I never brought Fritos to school,” Kaleta told us.  “We didn’t have them at home much.  When we did, dad brought them straight off the conveyor belt with no salt on them.”

“Dad was into health food,” said Kaleta.  “He was a vegetarian.  We always went to the Natural Food Association meetings.  He was a follower of Dr. Shelton in San Antonio, who had a clinic for fasting.”

Doolin had a bad heart, bad lungs, and weight problems.  He was looking for alternative cures.  When he invented the Frito, C.E. Doolin imagined them as a side dish, a handful served with soup and salad.  He never imagined anyone would eat a whole bag at once.

“My mom developed many of the recipes printed on the back of the Fritos bag,” said Kaleta.  “Frito Key Pie was one of her inventions.  One of the strangest ones was Jets, which is melted dark chocolate on Fritos, dropped on a cookie sheet to solidify.  Fat on top of fat.”

1. Pick through the beans to discard any pebbles or other debris. Rinse the beans well. Soak in plenty of water to cover for at least 4 hours or overnight. Drain the beans and set aside.

2. In a heavy pot, fry the bacon over medium-high heat until it browns, about 10 minutes. Stir in the onion, celery, bell peppers, and garlic and cook, stirring occasionally, until the vegetables soften but still have some crispness, about 5 minutes. Scoop out half the mixture and set aside (refrigerate if you’re not planning to serve the beans as soon as they’re cooked.)

3. Add the beans to the remaining vegetables in the pot and enough water to cover by 1 inch (6 to 8 cups). Bring to a boil over high heat, then reduce the heat so the beans slowly simmer. Do not cover the pot. Start testing after 20 minutes, though they may take as long as 1 hour. When the beans start to feel soft, stir in the salt and pepper.  Stir the beans occasionally as they cook; they’re done when just tender, but not much. (Note: For a thick bean broth, puree ½ to 1 cup of the beans and return them to the pot.)

4. Ladle the beans, with some of their liquid, into bowls or cups. Spoon on some of the reserved bacon mixture (reheat if necessary in skillet or microwave). For extra flavor, drizzle with olive oil and a splash of vinegar to taste.

Heat a can of Wolf brand chili with beef.  Take a small bag of Fritos, slit the bag open, pour the chili on top of Fritos.  Eat it with a spoon right out to the bag.