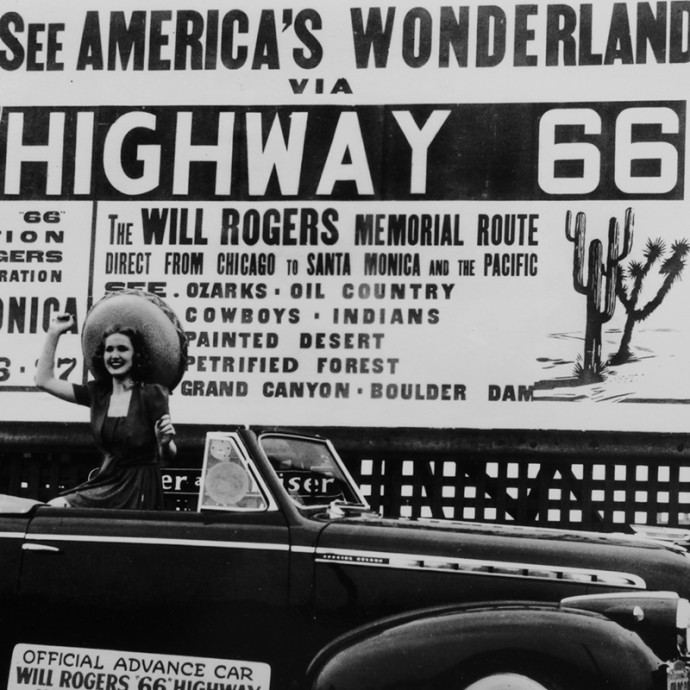 John Steinbeck called it the “Mother Road.” Songwriter Bobby Troup described it as the route to get your kicks on. And Mickey Mantle said, “If it hadn’t been for Highway 66 I never would have been a Yankee.” For the Dust Bowl refugees of the 1930s, for the thousands who migrated after World War II, and for the generations of tourists and vacationers, Route 66 was “the Way West.” Route 66, the first continuous paved highway linking east and west was the most traveled and well known road in America for almost fifty years. From Chicago, it ran through the Ozarks of Missouri, across Oklahoma and the Texas Panhandle, up the mesas of New Mexico and Arizona, and down into California to the Pacific Ocean. The First road of it’s kind, it came to represent America’s mobility and freedom —inspiring countless stories, songs, and even a TV show.In Part 2 of Route 66, Studs Terkel reads from “The Grapes of Wrath” and comments on the great 1930s migration along Highway 66. We hear from black and white musicians including Clarence Love, head of Clarence Love and his Orchestra, Woody Guthrie and Eldin Shamblin, guitar player for Bob Wills and his Texas Playboys who remember life on the road for musicians during the 1930s. We travel the history of the road from its beginnings as “The Main Street of America,” through the “Road of Flight” in the 1930s, to the “Ghost Road” of the 1980s, as the interstates bypass the businesses and road side attractions of another era.

Produced by The Kitchen Sisters and narrated by David Selby.

Thank you to our sponsor Animoto.

Route 66
created in Animoto
Photographs from The Library of Congress