The Secret (and not so Secret) Life of Theresa Sparks 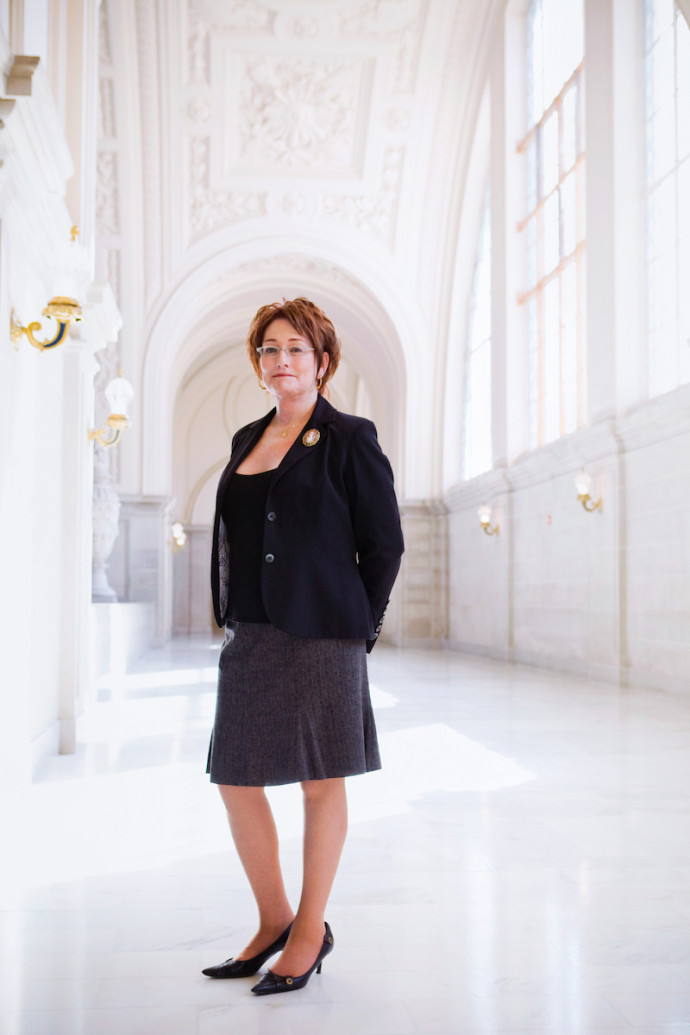 Theresa Sparks has lived more than one life. Born a guy’s guy, a man’s man, cowboy boots, motorcycles, a stint in the army, married his childhood sweetheart, kids, big successful business. But the truth was more complicated than that. In Fugitive Waves, Episode 21, one of San Francisco’s most respected and outspoken transgender activists tells her truth, that she was walking around in the wrong suit for 50 something years. “Transparent” years before the series saw the light of day.

Theresa Sparks has led a double life. There’s a before and there’s an after.

The before was the story of a boy who grew up outside of Kansas City.

“It was kind of a Beaver Cleaver childhood,” says Sparks. ”I was always a good student, your typical normal Midwestern kid.”

Sparks and his first wife were born in the same hospital, six days apart and grew up next door to one another. They eventually married and had three kids.

His dad was a “guy’s guy.” He wore snakeskin boots, had a Harley and a muscle truck. They were always tinkering in the garage together and around the house and each Saturday they’d venture to the hardware store for the tool of the week. Sparks coached his kids soccer and baseball team, was in the Navy, had a beard, smoked cigars. But, since childhood, Sparks had a secret life.

Sparks began dressing in women’s clothes as a young boy. As a teenager he would often venture out after dark to a neighboring town, buy women’s clothes at K-Mart, and find an out of the way service station where he could change. He would drive alone for hours wearing the clothes, then return to the gas station, throw the clothes away and go home. He felt that if he could get married and have a great relationship that his urge to dress in women’s clothes would disappear, but it never did.

As time went on, Sparks ascended in the recycling business and he engineered and built refineries all over the world. On business trips, he began traveling with two suitcases, one with his business attire, another full of women’s clothes. He would rent two hotel rooms, one for the man there on business, a second for the woman in him. He would dress and sit alone in the room, just in the relief of feeling in the right skin.

Sparks eventually disclosed his secret life to his wife, who divorced him. He remarried, but this marriage failed too.

“I remember both my wives saying, ‘You know, do you want to be a woman?’ I would always tell them the same answer: I have no idea.”

He kept his secret well hidden from his children. “There weren’t really any signs,” Adam says.

But after his oldest son’s graduation from boot camp, Sparks took his two sons and daughter to the cemetery in Kansas City where his father and brother were buried, and told his kids that inside he was a woman and had been coming to terms with it for years. His children all started crying. His oldest son spit on the ground, before they got into their car and drove away, leaving Sparks alone in the cemetery. Adam and his brother did not speak to their dad for a decade.

“I kind of dealt with it like my father had just passed away,” says Adam.

Sparks went to Thailand for Gender Reassignment Surgery. When she came back to the US, she settled in San Francisco, with no relationship with anybody from her former life. She struggled to find a job; unemployment in the transgender community hovers around 70%. She eventually found work in the mail room at Good Vibrations, one of the best known female sex toy companies in the country. Sparks, who always had a good head for business, went from packer/shipper to CEO and ran the company for several years. 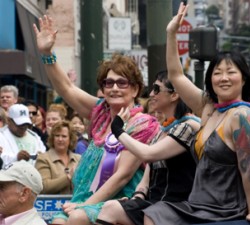 Sparks and Cho at the SF Pride Parade

Comedian Margaret Cho served on the Board of Directors of Good Vibrations with Sparks.

“When I think of her, I think about almost a literary character like Orlando,” Cho says. “Somebody who lives for a period as a man and then lives as a woman. She has this incredible business mind. She is a business woman but she also has a lifetime where she was a businessman.”

Sparks got involved in community political activities because of violence against transgender people and quickly was thrust into San Francisco politics. She was appointed by Mayor Willie Brown to serve on the Human Rights Commission, and was subsequently appointed to become a Police Commissioner, and eventually elected President of the Police Commission.

Woman of the Year

In 2003, California State Senator Mark Leno, who then served on the California Assembly, named her the 13th Assembly District’s Woman of the Year and brought Sparks to Sacramento for a ceremony. A few nights later, Jay Leno made note of this in his monologue on The Tonight Show.

“The joke line was something like ‘Leave it to California to choose a man as Woman of the Year,’” says Mark Leno, “But Theresa rose above it. She’s seen it all.”

Lt. Lea Militello of the San Francisco Police Department remembers the first time Sparks rode in the Gay Pride Parade as Police Commissioner with the LGBT officers. “We now have about 250 lesbian, gay, bisexual, and transgendered police officers in our department,” Militello says

Sparks explains that most people don’t realize she is transgender until she speaks. She’s worked hard on changing the pitch of her voice. “I’ve taken voice lessons,” she says. “I had surgery on my vocal chords, which could have left me without a voice. Finally at some point, you just kind of give up. You know, it is what it is.”

It was ten years before Adam saw his father after the surgery.

“My dad still talked the same,” he says. “Still wearing jeans, they were just tight. Still had shoes on, they just happened to have three inch heels. Same hands, just with fingernail polish. It was almost like my dad was walking around in the wrong suit for fifty years. And then was wearing the right suit.”

Candidate for San Francisco Board of Supervisors

“We butted heads a lot in the first year. She wouldn’t take any of my crap and I wouldn’t take any of hers,” says Delagnes. But now he considers Sparks an ally and the Police Officers Association has endorsed her for her current run for the City and County of San Francisco Board of Supervisors. If elected she will become the city’s first transgender Supervisor.

“My dad’s always been a good leader,” says Adam. “To be successful in one life is hard enough. To be successful in two is certainly harder. My dad is very driven in whatever world she is in at the time. Hidden or not, she’ll get it done.”