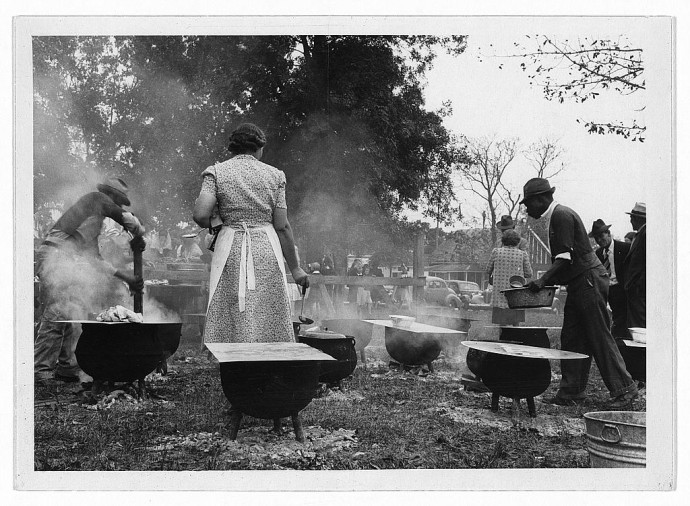 Hidden Kitchens — we aren’t the first project to look for them. Our search for the kitchen legacies of this country has uncovered rituals, recipes and now, an archive. Producer Jamie York and The Kitchen Sisters followed a listener’s call to the Library of Congress and beyond — and discovered “America Eats.”

During our planning process, we read Mark Kurlansky’s book Choice Cuts: Food Writing from Around the World and Throughout History and came across the following passage:

“In the 1930s Nelson Algren, a young fiction writer who in 1949 would win the first National Book Award for The Man with the Golden Arm, joined the Illinois Writers Project, part of the federal Works Progress Administration (WPA).”

It set us on the course of this story and led us to the Library of Congress, where some of the “America Eats” archives are housed. This remarkable WPA project chronicling American “foodways” in the 1930s has never been published. The parallels between this project and ours astounded us.

Each region had its own “America Eats” team. Their writings, photographs and even some scripts for a proposed weekly radio program are tucked away in collections around the country — at the New York Municipal Archive, the Mississippi Department of Archives and History, the University of Iowa Library, and the State Library and Archives of Florida, as well as at the Library of Congress.

Independent producer Jamie York traveled to Florida to interview one of the last living writers on the project, Stetson Kennedy, who died in 2011. You can see some of Kennedy’s photographs below and on The Library of Congress website. 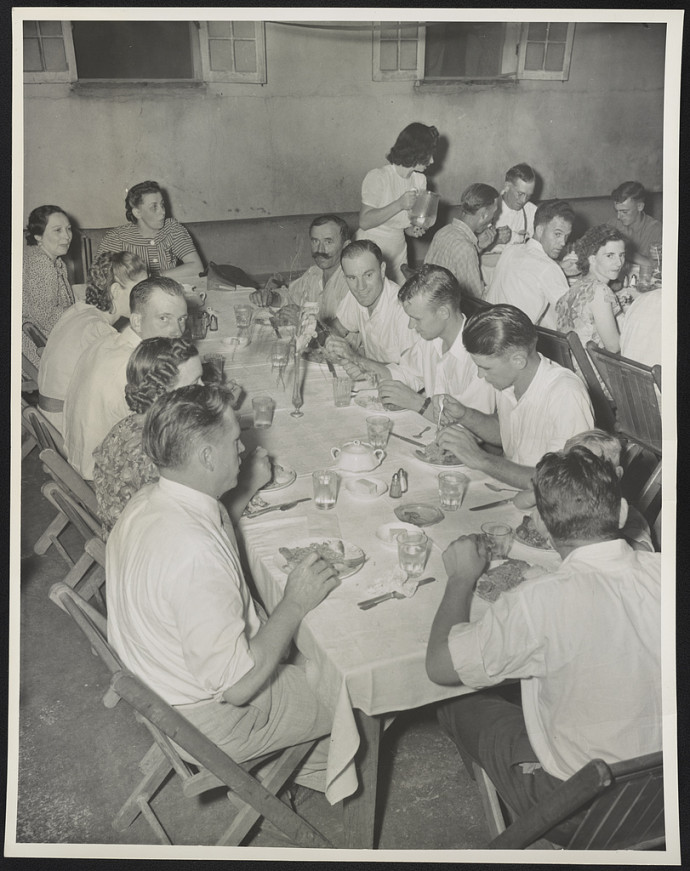 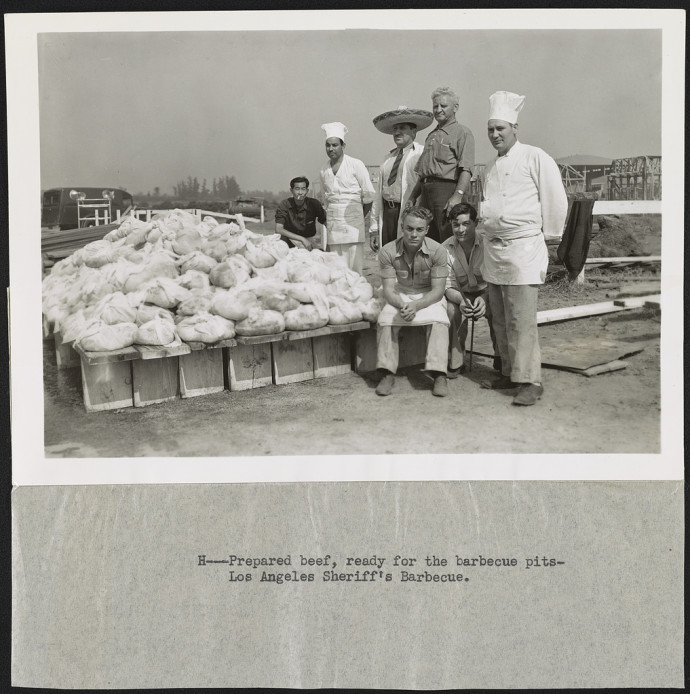 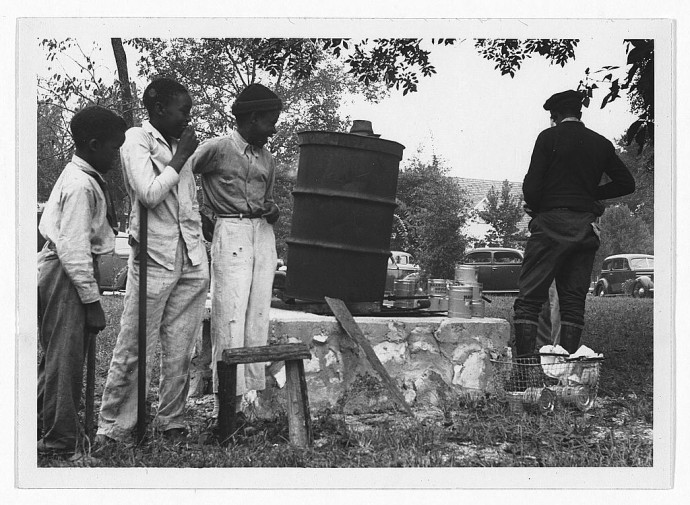 Boiling coffee at the Florida Peanut Festival. (Library of Congress) 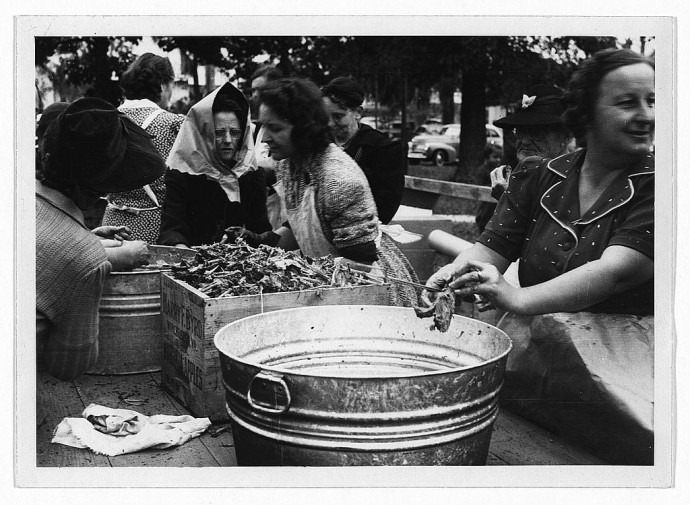 Women preparing chicken for the pilau dinner at the Peanut Festival in High Springs, Florida. (Library of Congress) 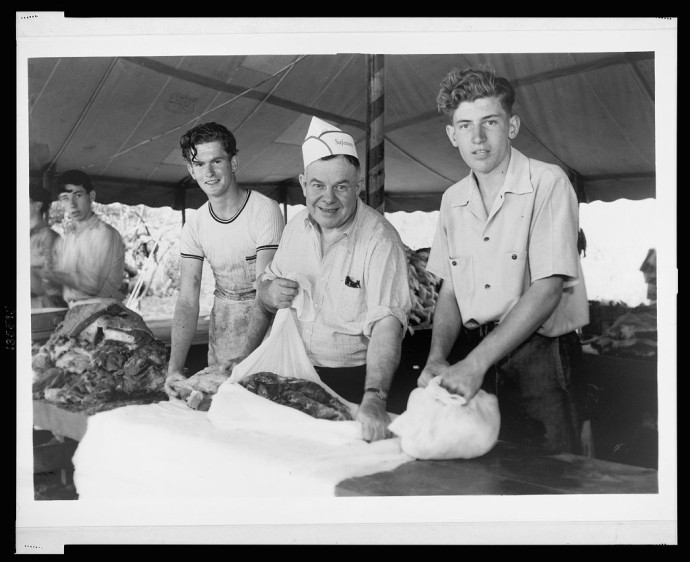 Men wrap beef in cheesecloth at a sheriff’s barbecue in Los Angeles. (Library of Congress) 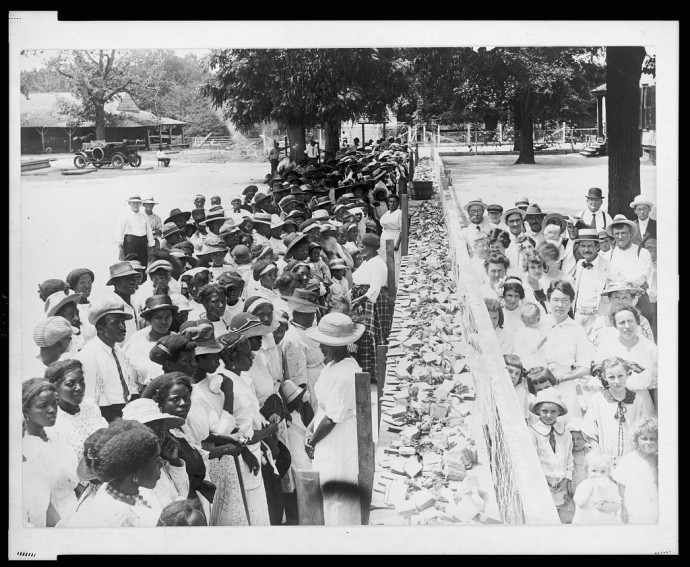 This photo collected for the America Eats project shows a segregated barbecue at FM Gays Plantation, Alabama, 1914. (Library of Congress)

Recipes from the ‘America Eats’ Project

These recipes are all from the unfinished Mississippi portion of the “America Eats” project. They were collected for a cookbook called Possum and Pomegranate. John T. Edge, director of the Southern Folkways Alliance at the University of Mississippi, unearthed them for Hidden Kitchen’s producer Jamie York. Some of the recipes did not carry attribution information; nobody knows who wrote them. These recipes are untested.

Remove the seeds from enough ripe persimmons to make a bushel of fruit without the seeds. Line a wooden keg with clean corn shucks. Mash up the persimmons with half a bushel of corn meal and half a bushel of sweet potato peelings. Put in the keg and cover with water. Cover and allow to stand until the taste is right, and then bore a hole in the top of the keg and draw off the beer. If you put a piece of cornbread in a cup and fill up the cup with persimmon beer, you’ll have something highly satisfactory. Indulge cautiously until you learn your capacity.

This dish is not made with pie crust but with ordinary biscuit dough, made just a trifle shorter than usual. Roll the dough out a little thinner than for biscuit, on a well-floured cloth. Cover the top of the dough with a thick layer of fresh, ripe blackberries. Roll the dough and berries up and tie the whole in the cloth on which it was rolled. Put the whole thing in a pot of briskly boiling water. Bring it back to boiling point as quickly as possible and then cook steadily until done. While the dumplings boil, make a sweet sauce as follows: Take 1 1/2 cups of top milk, one cupful of sugar, 1/4 cup of butter. Cook together thoroughly and flavor by putting in sprigs and leaves of mint, which have been bruised. Remove the mint leaves before serving the sauce, which should be served hot on slices of the boiled dumplings.

The fisherman out on the shrimping boat eats but one meal a day, and that when the day’s work is done. His recipe for Shrimper’s Sauce has been handed down through many generations of fishermen and, although based on Creole recipes of 200 years ago, it shows by addition of salt pork the Austrian influence among shrimpers.

Directions: Fry the chopped salt pork in the oil; add the onions, chopped fine, and fry but do not allow to burn; add tomato sauce, then the boiling water, and never let the water stop boiling; add chili powder, minced garlic and the remaining ingredients. Cook slowly for about 30 minutes, stirring frequently. The sauce made, the cook sets it carefully aside and looks over his supplies to decide what the meal will be.

Directions: Use large oysters, looking them over carefully for bits of shell. Wash and roll in seasoned corn meal. Let stand for 10 minutes, then dip in prepared egg dip, and roll in bread crumbs. Let stand another ten minutes. Fry only three or four at a time in hot fat.

It is better to have little finger-sized cucumbers, but as far as the taste goes, bigger ones cut into slices or chunks about one-inch thick are just as good. There should be about two gallons of cucumbers. Place in a stone jar and pour over them two cups of salt and one gallon of boiling water. Let this stand for one week, skimming every day.

On the eighth day, drain well and pour over the fruit one gallon of fresh boiling water. Let this stand for 24 hours.

On the ninth day, drain again and pour over a second gallon of fresh boiling water. Add one tablespoon of powdered alum. Let this stand 24 hours.

On the 10th day, drain liquid off and pour over one gallon of fresh boiling water. Let stand 24 hours.

On the 11th day, drain water off and put the fruit in a clean stone jar or a preserving kettle. Prepare a syrup of five pints of vinegar, 1/2 ounce of celery seed, six cups of sugar and one ounce of stick cinnamon. When this comes to a boiling point, pour it over the cucumbers. Let stand 24 hours.

On the 12th, 13th and 14th day, drain and reheat the syrup, adding one a cup of sugar each day. On the 14th day, pack the cucumbers in fruit jars and cover with syrup. Put rubbers and tops on the jars but do not screw tightly. Heat these jars of sweet pickles to the scalding point and seal. You may think you would never be willing to undertake such a prolonged process, but if you ever get one sniff of these pickles, you will do anything necessary to get your pantry stocked with them. They smell like Araby the Blest, and they taste better than they smell.