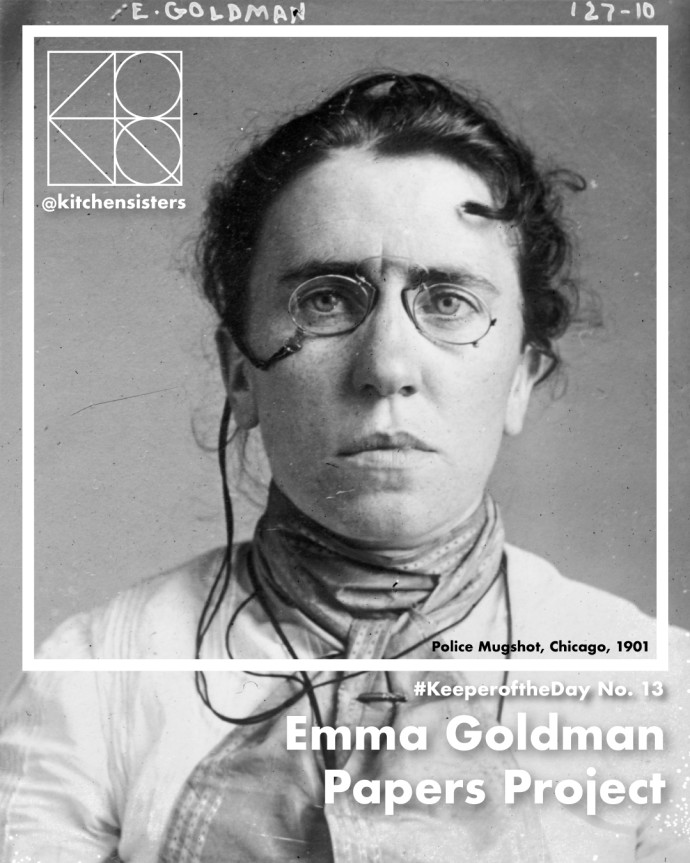 Emma Goldman was a woman ahead of her time, an anarchist, a Jewish immigrant to America. Born in the Russian Empire, her time in the United States was mostly between 1885 and 1919. Goldman was a fierce and eloquent public presence, a speaker and organizer about the issues of injustice, poverty, women’s independence and freedom, about birth control, labor rights, and education. Her vision was one of egality, harmony, beauty and individual action. Goldman was deported from America in 1919 for speaking out against involuntary registration into the draft for WWI but even more so because she was an immigrant and a radical.
What began decades ago as a passion for justice and a need to know more about this revolutionary woman who spoke fiercely for human rights and beauty became the Emma Goldman Papers Project, now 38 years old, founded and directed by Candace Falk and housed at UC Berkeley. Candace and her team have spent decades documenting Goldman’s life, including her correspondence with Chinese anarchists, Mexican anarchists, and her circle of comrades and friends including novelists Jack London, Sinclair Lewis, HG Wells, Henry Miller, Aldous Huxley, Agnes Smedley, and figures as varied as Albert Einstein, Lady Astor, Eugene Debs, Peter Kropotkin, Margaret Sanger, Elizabeth Gurley Flynn, and Carlo Tresca. Candace tells us, “We have been collecting organizing and editing the papers, letters, surveillance materials, trial transcripts, newspaper clippings, unpublished writings and published writings of Emma Goldman and have some 22,000 documents related to her life in this amazing archive preserving the history of a woman whose voice is really needed now.”
A reminder from Candace: “Our 22,000-document treasure trove is free and accessible to all,” here and here.
Make a tax-deductible donation to the Emma Goldman Papers Online.
The clip of Goldman above comes from the film “Anarchism in America.”