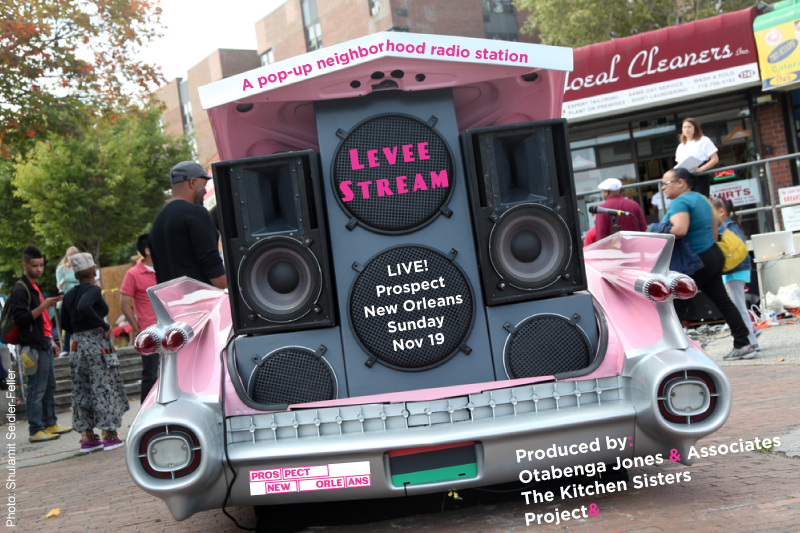 Part block party, part soapbox, “Levee Stream” is live from noon til five, broadcasting at the confluence of Bayou Road, Desoto and N.Dorgenois — a mix of live conversation and interviews with an array of international artists in town for Prospect.4, Bayou Road neighborhood regulars, entrepreneurs and visionaries, New Orleans artists and activists, DJs, live music, and a five hour “sonic prayer flag” that will unfurl across the afternoon and the neighborhood full of New Orleans voices, shards of sound and archival audio. Levee Stream is a day of close listening, unusual encounters, neighborhood revelation and food. Of course food. Meet us on the corner. Hear the stories, voices, visions, issues and music coming live at the “station.” Record your own story in the tiny shotgun shack on wheels (built by six high school students from UnCommon Construction) on the street next to Caddy.

A few of the people and performances appearing live on Sunday afternoon include: Chicken Violins — Rebecca Crenshaw came to New Orleans right after Katrina. A musician and music teacher she signed up with ArtistCorp who were bringing music teachers back in to New Orleans public school after the flood. Robert King and Albert Woodfox of the Angola Three — Robert King spent 29 years in solitary confinement in Angola Penitentiary. Since his release, after being found not guilty, he has worked ceaselessly, on behalf of prisoners rights and for justice and for political prisoners around the world.

A multitude of artists from Prospect.4 will talk of their new works at the corner cadillac station including Hank Willis Thomas, Monique Verdin, John Akomfrah, Xaviera Simmons and more. Gia Hamilton from the Joan Mitchell Center will also be part of the mix. DJ Flash Gordon Parks — Ethnomusicologist, collector, documentarian and DJ. Like Otabenga Jones & Associates, Flash comes from Houston with his crates and his big mind and mouth to spin some music and the stories behind it. Plessy & Ferguson — On June 7,1892 Homer Plessy, a shoemaker and light-skinned, free man of color bought a first class ticket, boarded a train and sat in the whites-only railway car of a New Orleans train in an effort to challenge the segregation laws of the era. Judge John H. Ferguson did the ruling that held in place the Jim Crow “separate but equal” laws that stood in the south, and went to the Supreme Court under the name Plessy vs Ferguson, til the Brown vs Board of Education decision upended it in 1954.

The Sonic Prayer Flag — Voices, stories and shards of sound and music from The Kitchen Sisters haunting and evocative New Orleans sound and storyscape will be part of the live mix of the day. The Jones Sisters — Four New Orleans sisters, age 12-18 who have been singing together for nine years and sing knock-out gospel and organ, and won the Rhythm of Gospel Award for Youth/ Young Adult Artist of the year, will power the station-installation on air at noon on Sunday. Solitary Gardens — Artist and social activist, Jackie Sumell, who with Herman Wallace of the Angola Three created the powerful project, “Herman’s House” has ignited a new vision “Solitary Gardens” a project at the intersection of public art, alternative land-use and social sculpture, planting gardens designed after 6×9 solitary confinement cells throughout the city of New Orleans to make graphic the issues of justice, incarceration and solitary confinement and propel and provoke a dialogue with the community and with prisoners. Floating Cities — David Waggoner, water visionary and architect with the firm Waggoner & Ball has been at the forefront of designing innovative, sustainable stormwater management plan systems in post-Katrina New Orleans. He speaks his vision, floating streets and water gardens. We’ll also hear from Julia Kumar Drapkin from ISeeChange and Rachel Bruenlin from the Neighborhood Story Project.

Voices and stories from the neighborhood including Dr. Dwight McKenna & Beverly Stanton McKenna, founders of the New Orleans Tribune; creators of Le Musée de Free People of Color; Mama Vera from the Community Book Center, one of the hubs of black culture on Bayou Road in the 7th Ward; and neighborhood stalwart, healer, soapmaker and singer, Sister Andaiye Alimaya of The King and Queen Emporium, whose corner will host the Cadillac. Domino Sound, the mighty vintage record store in the neighborhood will also DJ the day.

Skylar Fein & Skaters from the Parisite Skateboard Park — In the wake of Katrina, after their illegal, unofficial DIY skateboard park was torn down by the city, a group of skateboarders, spearheaded by P.1 artist Skylar Fein, created a nonprofit called Transitional Spaces. In partnership with a construction firm, the city, and Tulane they created Parisite Skate Park, an 18,000 square foot space under Interstate 610 Overpass in Gentilly, the first public skatepark in the New Orleans history

Food will come from the neighborhood and beyond — and will change with the day.

For more information about Prospect.4: The Lotus in Spite of the Swamp visit prospectneworleans.org