[soundcloud url=”https://api.soundcloud.com/tracks/339002233″ params=”color=ff5500&inverse=false&auto_play=false&show_user=true” width=”100%” height=”20″ iframe=”true” /]
Robert King Wilkerson (aka Robert Hillary King) was imprisoned at Louisiana State Penitentiary in Angola, Louisiana for 31 years. Twenty-nine of those years he was in solitary confinement. During that time he created a clandestine kitchen in his 6×9 cell where he made pralines, heating the the butter and sugar he saved from his food tray over a tiny burner concocted from a Coke can and a toilet paper roll. King’s case was overturned in 2001 and he was released. He was living in New Orleans during Katrina, refused to leave his dog, and weathered the storm in his apartment. Today he lectures around the world and makes candy — which he calls Freelines — to bring attention to issues of prison reform and the story of his comrades and The Angola Three. 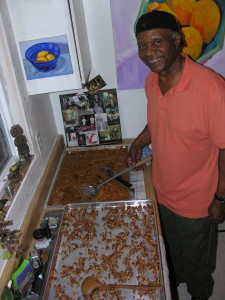 In “Living with Water” Julia Kumari Drapkin, director of ISeeChange, a community weather and climate journal project, takes us on a tour of her flooded neighborhood in New Orleans after a recent storm. She talks about the vision of creating water gardens, floating streets and other water projects that look towards living with water in New Orleans rather than continuing to completely drain and sink the land.
PHOTOS FROM JULIA KUMARI DRAPKIN
[metaslider id=6124]