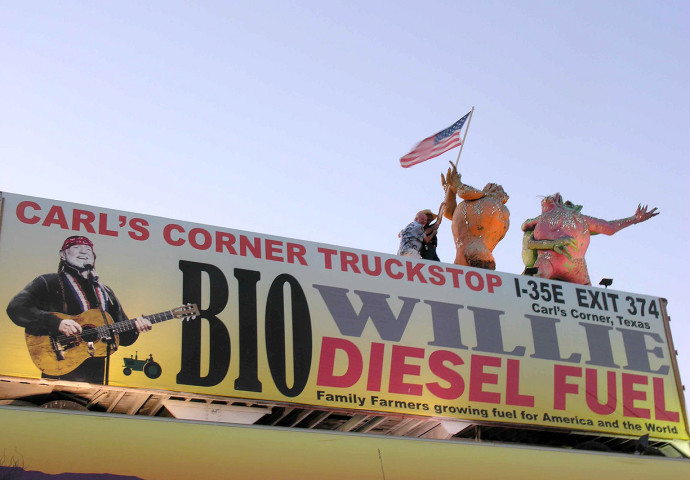 In celebration of truckers everywhere and of Radiotopia’s new show Over the Road, The Kitchen Sisters visit some of their favorite Texas pitstops. First up — a truck stop in Carl’s Corner, Texas off I 35 between Dallas and Austin where Willie Nelson first introduced his BioWillie fuel in 2004.

Willie’s friend, Carl Cornelius, founded Carl’s Corner in the early 1980s in order to sell liquor in a mostly dry county. He opened up a truck stop — a trucker’s haven and tourist attraction — with hot tubs, dancing girls and 10 foot high dancing frogs atop the pumps. In 1987 Willie held his legendary 4th of July Picnic at Carl’s Corner. But a few years later, following a fire and some set major backs, the place fell on hard times. That’s where our story begins… with Willie Nelson bringing in BioWillie biofuel to save Carl’s Corner Truck Stop. We hear from Willie Nelson, Kinky Friedman, Carl Cornelius, Joe Nick Patoski, truckers and biodiesel disciples. And we visit a bio-diesel home brew class, where recipes are shared on how to make your own, in a blender, the kitchen way.